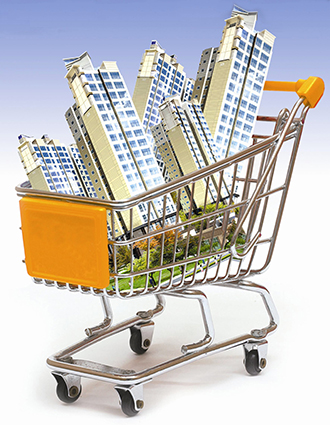 A retired 62-year-old surnamed Kim, who made his fortune by investing in real estate, has been scouring auction sites recently to keep abreast of market trends with an eye to snapping up a cheap apartment after the upcoming Chuseok harvest holiday.

“I think housing prices in Seoul have dropped so much that they may hit rock bottom around November,” Kim said. “I also expect the incoming government to come up with measures to revive the real estate market.”

There is a growing consensus that the domestic real estate market, which has never recovered from the 2008 global credit crunch, is due to bounce back soon. And as such sentiment spreads, huge crowds have started flocking to the pre-sales of apartments that have yet to be built.

According to a survey by the Korea Housing Institute for September, construction companies’ outlook has slightly improved. Their view on the prospects of the housing business in Seoul and neighboring metropolitan areas, including Gyeonggi, improved 12.8 points from August.

This was the first time the index has risen since it was first compiled in June.

“The reason the index rose this month is largely due construction companies’ high expectations that the market will recover,” said Kim Ji-eun, a research fellow at the Korea Housing Institute.

The recent trend of long-term housing deposits, known here as jeonse, exceeding 60 percent of the sale price of apartments is also seen as a positive as this percentage is seen as a tipping point after which more home renters become home buyers.

In August, jeonse prices on average accounted for 61.69 percent of apartment prices, according to KB Kookmin Bank. This marks the highest ratio since September 2003.

“Recently we have been getting a lot of inquires about unsold apartments, especially after the government announced it would be lowering the acquisition tax on residential properties earlier this month,” said Kim Sin-jo, CEO of iNEX Housing, a pre-sale realtor.

Some experts expect the market to experience an upswing after the presidential election in December.

“When new governments take power they usually come up with economic stimulus measures,” said Lee Nam-soo, head of Shinhan Bank’s real estate division. “It is very possible things will change in the first half of next year.”

But skeptics expect apartment prices to drop by up to another 15 percent.

Song Hong-ik, a researcher at Daewoo Securities, said that apartment prices in Seoul will drop to 14.42 million won per 3.3 square meters early next year, down from 16.97 million won at present, according to a recent report. He cited sluggish economic growth.

With the economically active population between the ages of 30 and 54 likely to shrink next year, declining real estate prices are almost inevitable unless the government can achieve economic growth in excess of 5 percent, Song added. The government’s prediction of 3 percent growth for this year is now seen as optimistic. Many investment banks project it will expand in the 2 percent range this year and grow 3 percent in 2013.

Song said houses in Seoul are already overvalued as they already approximate Tokyo prices. Japan’s GDP per capita is roughly twice as large as Korea’s.

“In light of this, people still believe they can make a profit if they just wait it out. But the paradigm has changed and it’s time for people to face reality.”

Ham Yeong-jin, head of research at Budongsan Serve, an online real estate agency, said there is nothing to indicate the market is about to bottom out.

“This is too much of a stretch, as it’s only happening in a few limited areas,” he said.

Others doubt a new government will be able to stir major change.

“The government has already deployed all the measures it can think of,” said Park Won-gap, head of KB Kookmin Bank’s real estate department. “What new measures are there?”

Rumors that the market was bottoming out first surfaced in late 2010, then again in October and November last year, as well as this April before the general election. However, such sentiment quickly disappeared.

“Many investors want someone to tell them that now’s the time to buy,” said Park at KB Kookmin Bank. “That’s why such rumors crop up again and again.”