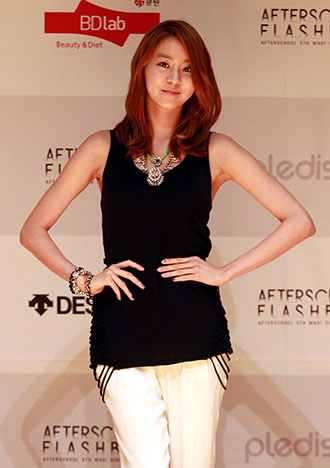 After School’s Uee has been cast in the upcoming KBS period drama “Jeon Woo-chi,” set to air from November.

The 24-year-old singer will join actor Cha Tae-hyun in the fantasy folktale set during the Joseon Dynasty (1392-1910). In 2009, a film adaptation of the myth starring Kang Don-won and Im Soo-jung was a big hit at the Korean box office.

Since then, there have been talks that a television adaptation would be made, but it was passed off as rumors until now.

The drama is based on Taoist wizards taking on evil goblins and focuses on the protagonist Jeon Woo-chi. Uee says she hopes to make her mark as a “serious actor.”

“I want to do away with the ‘idol singer-turned-actor’ in this piece and really step up my performance,” said Uee through her agency on Friday.

Last year, Uee took part in tvN’s “Birdie Buddy” and KBS 2TV’s “Ojakyo Brothers” and proved that she had more than what it takes to be an all-around entertainer.