Will plastic prove fantastic for autos?

Will plastic prove fantastic for autos? 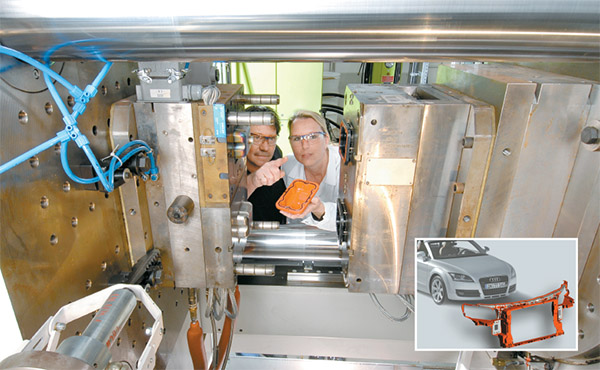 Workers at the German chemical company Lanxess watch as high-performance materials are produced at one of the company’s plants. Provided by the company


NEW YORK - Can plastics replace traditional materials such as steel or aluminum in automobiles? As the automobile industry moves to make vehicles lighter, the competition between chemical companies and steelmakers is growing in ferocity as both compete to produce better auto parts.

“Carmakers know that the most efficient way to reduce the fuel consumption of an automobile is to reduce the weight of the car,” Axel C. Heitmann, CEO of the German chemical company Lanxess, said during its “Mobility Day” event in Charlotte, North Carolina, last week. “They also understand that lighter cars are essential to the future of electric mobility.”

Studies have shown that losing 10 percent of a car’s weight can improve fuel efficiency by 3 percent and allow it to accelerate 8 percent faster, he added. 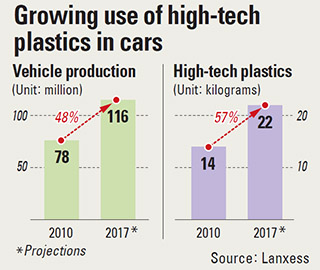 According to a report by Korea Investment & Securities, automotive researchers have been working to reduce cars’ weight in three ways: by changing the chassis; devising better assembly technology; and improving manufacturing processes like hydroforming, a way of shaping metals and other materials.

But the main focus is the materials used in auto parts, the report said.

According to industry insiders, auto parts made of high-tech plastics now account for 20 percent of today’s car components. They said this share will likely grow at a rate of 7 percent a year.

Lightweight polyamides and polyesters are already used in a variety of automobiles, including coolant pipes, battery housings, steering rods and pedals.

Chemical companies have been moving to replace traditional steel parts with high-tech plastics.

Germany’s Lanxess, a leading force in high-performance materials (HPM), opened its first production plant for high-tech plastics in Gastonia, North Carolina, last week based on an investment of $20 million.

It has also purchased Bond-Laminates and is cooperating with ZF Friedrichsahfen, which supplies driving technology and chassis parts, to produce brake pedal that are reportedly 50 percent lighter than regular steel pedals.

Meanwhile, local firms such as Cheil Industries and Kolon Plastics have recently finished building new plants and are ready to supply more engineering plastics such as polycarbonates and polyoxymethylene.

In response, steel companies are also rolling out lighter and safer materials and products.

The nation’s leading steelmaker Posco signed a deal with French automaker Renault last November to co-develop lightweight auto parts made with magnesium. It also signed a preliminary deal with a trading unit of Japan’s Toyota Group to cooperate on magnesium and other rare metal-related businesses.

“I’m aware that of course they [steel companies] are not sleeping and they are working on their own ways to find innovation” said Michael Zobel, the head of HPM at Lanxess. “But high-tech plastics are not only about reducing weight. It is also about freedom of design and adding functionality.”