First come fishing boats, then a threat from North

First come fishing boats, then a threat from North 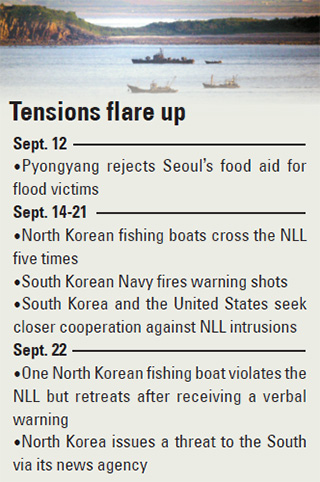 A day after South Korea fired warning shots at North Korean fishing boats following brief incursions over the Northern Limit Line (NLL), Pyongyang threatened military action on Saturday, saying that “it is ready for an operation order to turn the Yellow Sea into a trap for the enemy.”

Senior government officials in Seoul see the “unreasonable” threat as a diversionary tactic to distract the North Korean public from internal conflicts building up under its new leader Kim Jong-un.

From Sept. 12 to Saturday, a number of fishing vessels from the North crossed the tense maritime border on six occasions. The North claims they were all Chinese fishing vessels.

The latest intrusion on Saturday saw a single boat stray 400 meters (1,312 feet) into South-controlled waters. It crossed back immediately after receiving a verbal warning from the South’s Navy.

On Friday, six boats crossed the border in the Yellow Sea and did not retreat until warning shots were fired. None of the vessels were reported to have been hit.

Pyongyang responded by blaming Seoul for “going on a shooting rampage.” Describing the action as “an adventurous military provocation,” the North’s Korean Central News Agency said, “The Southwestern Frontline Command stands ready for an operation order to turn the Yellow Sea into a trap for the enemy.”

“What remains to be done now is a powerful strike of the North’s front units, which know no limits,” the KCNA reported.

The NLL has been the scene of several naval skirmishes between the two sides, with the most recent flaring up in March 2010 when North Korea attacked the Cheonan warship killing all 46 sailors on board.

Government officials here say the North’s bellicose remarks are part of a scheme to divert attention away from internal political discord in the North that is believed to have sprung up since Kim Jong-il died in December.

Speculation is growing that high-level North Korean officials are scrambling for political power while the country seeks economic and political reforms.

“We have confirmed signs that the North is going through an internal power play between the military and ruling party as they each try to defend their positions,” a senior government official said yesterday.

“The Kim Jong-un regime may seem from the outside as if it has entered a period of stability, but in reality that is not the case.”