The approval rating of Park Geun-hye, the presidential candidate of the ruling Saenuri Party, has dropped according to a recent poll conducted by the JoongAng Ilbo, while the ratings of her two rivals Ahn Cheol-soo and Moon Jae-in from the liberal camp have gone up.

Assuming the election boils down to a two-horse race, the poll showed Park to be trailing independent candidate Ahn by 2.4 percentage points. Park’s approval rating was 47.4 percent, while Ahn’s was 49.8 percent. 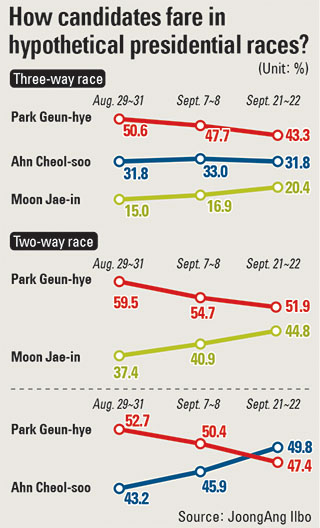 This is the first time Ahn’s rating has surpassed that of Park in a JoongAng Ilbo poll. The margin of error was plus or minus 2.5 percentage points.

This was the seventh poll of its kind conducted by the paper ahead of this election. Some 1,500 eligible voters were picked at random and polled for two days from Friday by phone.

In the event of a two-way race between Park and Moon, the presidential candidate of the Democratic United Party, Park was still in the lead, with 51.9 percent to Moon’s 44.8 percent.

Park’s popularity seems to have taken a hit as a result of recent scandals surrounding her aides, including former lawmaker Hong Sa-duk.

Hong stands accused of receiving illegal political funds before the April 11 legislative elections, while former lawmaker Song Young-sun has also been linked to a bribery case.

Park’s refusal to acknowledge past wrongdoings that occurred under the rule of her father, late President Park Chung Hee, are also seen to have damaged her credibility in the eyes of voters.

Since she threw her hat in the ring in August, the liberals have been demanding Park to apologize for her father’s dictatorial rule.

In contrast, Moon and Ahn are seen to have gained popularity in recent weeks. Moon confirmed his presidential candidacy with the DUP on Sept. 16 after winning multiple primaries against Sohn Hak-kyu, Kim Doo-kwan, and Chung Sye-kyun.

Voters also showed more support for Ahn after he officially declared he would run after months of prevarication last Wednesday.

In a three-way race, however, the poll showed Park still held the advantage with a rating of 43.3 percent to Ahn’s 31.8 percent and Moon’s 20.4 percent.

The poll also highlighted discrepancies in terms of which age groups and regions support the candidates.

Ahn was shown to appeal most to voters in their 20s, with his approval rating for this age group hitting 52.2 percent. He was also popular in Gwangju and Jeolla (50.8 percent).

He was also more popular in Seoul, where his rating climbed from 18.7 percent to 20.5 percent, and Incheon and Gyeonggi, where it jumped from 21.7 percent to 33.2 percent.

According to the poll, Ahn would only be slightly more popular than Moon if either ran as a single liberal candidate, with respective ratings of 44.6 percent and 43.1 percent.