Prosecutors said yesterday they have indicted two owners of the country’s largest hostess bar on charges of sex trafficking, tax evasion and other illegal activities.

The two brothers, identified only by their surname Kim, are suspected of earning more than 6.1 billion won ($5.4 million) by running a room salon in Seoul and arranging acts of prostitution more than 88,000 times between July 2010 and June 2011, according to prosecutors.

The two are also accused of evading tax worth more than 3 billion won and operating the room salon, known as YTT, in a hotel annex building, which was registered as a restaurant.

Room salons are a type of bar where male customers drink alcohol with young female employees and many arrange sexual liaisons with the women in nearby hotels. The two suspects employed up to 500 female employees at the underground room salon in a hotel building in Seoul’s affluent Gangnam District, southern Seoul, home to the adult entertainment establishment, according to prosecutors. 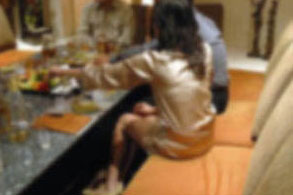 Prosecutors also said they were looking into allegations the two brothers gave about 48 million won to police officers in southern Seoul between 2006 and 2009 when they ran another room salon, to avoid any police crackdown.