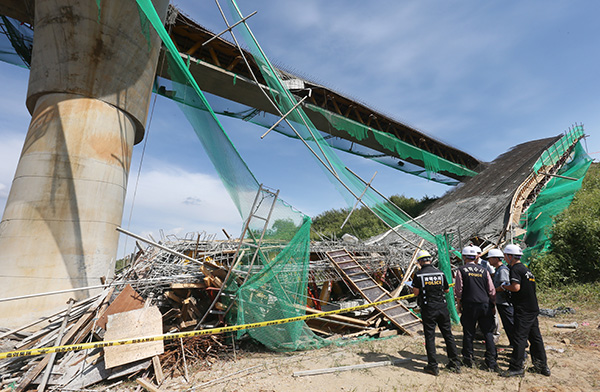 The collapse of a bridge over the Imjin River in Paju, Gyeonggi, in the midst of construction led to two deaths and 12 injuries on Saturday. [YONHAP]


The framework of a bridge being built over the Imjin River in Paju, Gyeonggi, collapsed on Saturday morning during a concrete pouring process, killing two and injuring 12 construction workers.

The workers had been casting concrete in 80-meter (260-foot) segments along the 15-meter-high bridge and were working on the final 55-meter span when the bridge collapsed at 8:50 a.m.

Two construction workers - 55-year-old Hong Oh-jun and 50-year-old In Bong-hyeon - died while being transferred to the hospital, and the remaining 12 injured are currently being treated in four nearby hospitals. The injured, which include two foreign workers, are reported to be in critical condition.

The construction of the 539-meter Jangnam Bridge, connecting Jeokseong-myeon in Paju with Jangnam-myeon in Yeoncheon County, Gyeonggi, began in February 2008 and was set to be completed by April of next year. The budget of the construction is estimated to be 36 billion won ($32.3 million).

Paju Police said yesterday they are investigating the cause of the collapse jointly with the National Forensic Service, concentrating on whether the materials used for construction were defective.

Because the bridge is located near the border with North Korea, it was constructed so that a portion could be easily blown up in an emergency situation, the police said. They are currently questioning the construction company, Taeyoung Engineering & Construction, in order to piece together the cause of the incident.

Two steel supports should have held up the bridge, police said. Other concerns raised include whether the construction company neglected safety procedures in order to speed up the completion of the bridge.

There were 17 construction workers on site on the day of the incident and concrete pouring began around 7:30 a.m. One worker said that as they were working, “Suddenly, the deck tipped over and collapsed.”