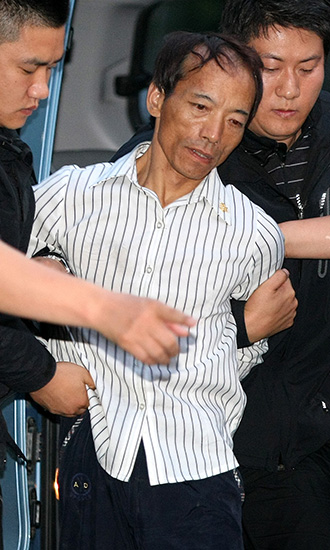 Ending a six-day chase, the fugitive Choi Gap-bok is taken back by police to Dongbu Police Precinct in Daegu on Saturday. By Gong Jeong-sik

After a frantic six-day chase, police arrested the lithe 49-year-old convict on Saturday who wiggled out of a prison cell in Daegu with Houdini-like maneuvers.

Choi Gap-bok, a career thief, was caught on the rooftop of a building in Miryang, South Gyeongsang, 30 kilometers (19 miles) south of Daegu late Saturday afternoon.

A practitioner of yoga, Choi slithered out of a jail cell last Monday by squeezing through a food slot 15 centimeters tall and 45 centimeters wide before climbing out of a window of the prison in Daegu’s Dongbu Precinct.

After his grand, barefooted escape, Choi ran to a residential home near the police station and stole a credit card and car keys. Police set up checkpoints, but Choi soon ditched the car 200 meters from a checkpoint in Choyeon-ri, North Gyeongsang, and disappeared into nearby Mount Nam.

For the next two days, police mobilized their squads, eight sniffer dogs and helicopters in search of the fugitive.

Police said Choi moved through the mountain range, climbing Mount Nam and Mount Hwaak, which eventually brought him to Miryang. Because he hid in the mountains during the daytime and moved during night, he was able to evade police surveillance.

On Thursday, police were finally on track again when Choi appeared riding a bus from Miryang to the city of Changwon in South Gyeongsang. He was spotted by a soldier on the bus who recognized Choi and got off to immediately report the sighting to the police.

Meanwhile, Choi told the bus driver that he felt motion sickness and asked for the bus to be stopped. He hopped off at Dongsan-ri Station in Miryang.

Hot on his track, the police warned the towns nearby and scavenged mountains around the area.

Traces of Choi were found. In the hut of a 58-year-old farmer surnamed Lee in the village of Hanam-eup, a note was written on the backside of a ripped page from a calendar that said “I am sorry,” signed, “Framed thief Choi Gap-bok.”

Lee’s relative discovered the note first, and they both initially dismissed the note as a prank and did not report it to the police until Saturday morning, when Lee found that someone had taken various items including two packs of ramen and had been fiddling with the stove.

The police began a major search around Hanam-eup, with the assistance of helicopters provided by North Gyeongsang and Busan police precincts. Some 400 police officers were mobilized on a rabbit chase in Miryang as various spottings of Choi were reported.

When he was finally arrested hiding behind a water cooler, he repeatedly claimed that he was “framed.”

Afraid he might bolt again, the police escorted a barefooted Choi back to Daegu and locked him in a cell without bars next to his previous cell. This cell has a food slot that is 11 centimeters tall and 102.5 centimeters wide.