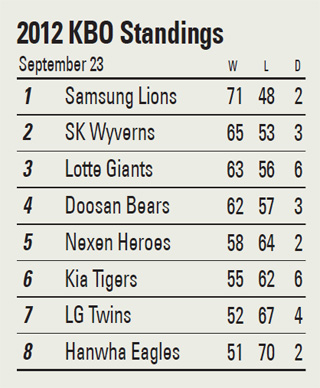 With the Lotte Giants unable to gain ground on the second-place SK Wyverns and the four playoff teams pretty well set, attention turns to individual competition and records during the final weeks of the Korea Baseball Organization season.

The Giants snapped a seven-game losing streak on Sunday with a 3-1 victory against the LG Twins, but were still 2.5 games behind the Wyverns, who beat the Doosan Bears, 3-1.

While the Giants were mired in their losing streak, the resurgent Wyverns’ won four straight, including two against the Giants.

With only eight games left for the Giants, manager Yang Seung-ho said he will focus on allowing players to get healthy for the post-season rather than straining to catch the Wyverns.

The gap between the two teams could further widen this week as the Giants have three games against the first-place Samsung Lions, including one last night. The Wyverns, meanwhile, are scheduled to play all of their four games this week against the three bottom teams.

Barring a drastic turnaround, the four playoff berths will go to the current top four teams. The Lions were 5.5 games ahead of the Wyverns heading into last night’s games and the fourth-place Doosan Bears were 5.5 games in front of the Nexen Heroes.

But the likely also-rans will not be without their share of individual honors since the league’s MVP award for the first time will be given based on players’ performances only during the regular season.

And two of the leading MVP candidates are Kim Tae-kyun of the last-place Hanwha Eagles and Park Byung-ho of the Heroes.

In addition, the KBO is on track to surpass 7 million in attendance for the first time ever by the end of the regular season, possibly as soon as this week.