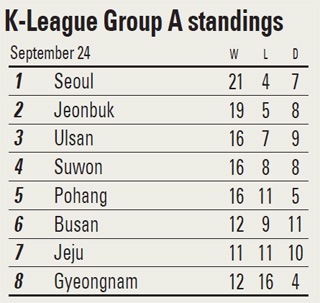 The K-league title for this year is turning into a two-way competition between FC Seoul and the Jeonbuk Motors as the two powerhouses emerge stronger in the second half of the season.

Both teams won the first two games of the split stage, the only teams to do so in the 16-strong league, further widening the gap with the rest of the pack.

League leader FC Seoul beat the Pohang Steelers 3-1 on Saturday and has earned 70 points on 32 matches. The runner-up Motors are in the chase, back five points after beating Gyeongnam FC 2-1 on the same day.

The third-place Ulsan Tigers, coming off a 2-1 win against Gyeongnam on Sept. 15, were held to a 2-2 draw by visiting Busan I’Park on Sunday and trail the Motors by eight points. The fourth-place Suwon Bluewings secured three points from a 2-1 home win against Jeju United on Sunday, but due to a 2-1 loss against the Steelers on Sept. 15, the Bluewings are on 56 points, one point behind the Tigers.

The 14-game split stage, which divides the teams into two groups, one for the top eight teams and the other for the bottom eight teams, has replaced the playoff system. And FC Seoul and the Motors, which have all three league titles since 2009 between them, are living up to expectations as the favorites to clinch the 2012 title.

Seoul in particular is streaking, winning five of the last six matches. Its coach Choi Yong-soo said that he won’t seek the improbability of winning all of the remaining 12 matches, but will still try allotting its resources as efficiently as he can.

Two of the crucial matches for the 2010 champions are just around the corner, including an away match at Ulsan on Wednesday and another away match at Suwon on Oct. 3. Seoul drew both duels with the Tigers this season and lost the two matches against the Bluewings.

The defending champion Motors will try closing the gap with Seoul as they face the Bluewings on Wednesday and sixth-place I’Park on Oct. 3. Suwon hasn’t won a single match against Jeonbuk since September 2008.