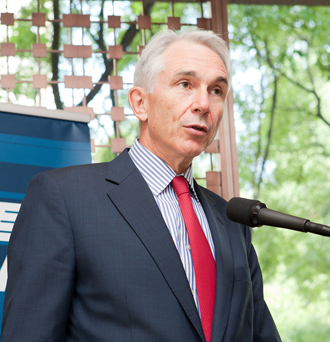 Korea’s main airports should keep offering unique services to encourage airlines to launch new routes to the country, as such connections have worked wonders in terms of feeding the domestic economy, Tony Tyler, CEO of the International Air Transport Association (IATA), said yesterday.

“Incheon International Airport has been consistently profitable and enjoys a great reputation after it agreed in 2007 to the 10 percent reduction in landing charges for the period between 2008 and 2010,” said Tyler at a press conference during his first visit to Korea since assuming the post.

The IATA, an industry trade group for airlines, is headquartered in Montreal, Canada.

He cautioned that the government’s plan to privatize the nation’s gateway airport could damage its reputation and impede the country’s growth momentum as the local aviation and tourism industries contribute 2.2 percent, or 23.1 trillion won ($20.5 billion), to GDP.

“Once an airport obtains private shareholders, its management has to operate the airport simply to maximize the profit,” said Tyler, implying that its past decision to reduce landing charges may no longer be possible once privatized.

He added that an airport, when owned by the government, serves as an engine to drive the economy.

The growing aviation industry helped Korea become the seventh country to join the 20-50 club, referring to countries with average per-capita income in excess of $20,000 and a population of 50 million, as it better-connected Korea to the world market.

“Korea could not have grown to one of the largest economies without its airlines business,” said Tyler. “The impact of aviation goes well beyond what jobs and GDP figures can describe. Efficient connectivity does not just happen”

He believes Korea will continue playing a leading role in developing the global aviation industry as Korean Air, its flagship flier, supports the IATA’s effort to cut operational costs. Korean Air is also a chief supporter of e-freight. The new system will entirely remove paper documents when it comes to loading air shipments.

He also forecasts that aircraft running on bio fuels may become commercially viable within a decade, meaning that industry profits should stabilize as they will not be subject to volatile oil prices. Currently, fuel accounts for about one-third of airline’s operating costs.

To minimize damage, aviation industries have been searching for an alternative. Although there have been 1,000 tests flights using bio fuels, significant challenges remain before its use can become mainstream.

“It’s going to require policy-wise government support to encourage related industries to commercialize bio fuel and take a risk in its production,” he said.

He added that even the idea of switching to such fuel was considered impossible as recently as five years ago.