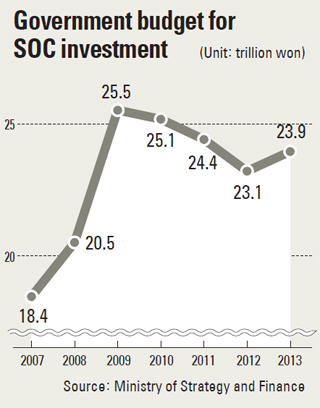 The government is making last-minute efforts to prevent the growth rate from falling below 2 percent by loosening regulations on businesses and the housing market, government sources said yesterday.

The Ministry of Strategy and Finance, speaking at a meeting on economic revitalization, said it will allow more businesses to avoid regular tax audits from next year.

Businesses that are accused of tax evasion will still be subject to the tax audit.

The finance ministry also decided to allocate 23.9 trillion won in social overhead capital (SOC), up 800 billion won, to strengthen the country’s social infrastructure. It said such investment has both tangible and economic effects, as seen in the cases of the four-river restoration project, 2012 Yeosu Expo and 2018 Pyeongchang Winter Olympics.

To bolster the country’s flagging exports, the ministry will ramp up its financial support for exporters from the current 70 trillion won to 80 trillion won next year.

An additional 69 billion won has also been earmarked to support small and medium-sized exporters. Another 11 billion won is set aside for joint export projects of large and small businesses.

The measures announced yesterday follow up on the government’s earlier stimulus package unveiled on Sept. 10 to release up to 5.9 trillion won into the market as part of efforts to boost domestic consumption.

“We must maintain fiscal soundness, but an economic recovery must be backed by active financial support,” said Finance Minister Bahk Jae-wan yesterday.

Bahk also said the government is working closely with the National Assembly to quickly legislate revisions to the real estate law that were included in the Sept. 10 plan.

The revisions seek to exempt buyers of unsold homes from sales tax for five years following their purchase and also cut their property acquisition tax in half.

Meanwhile, the Ministry of Land, Transport and Maritime Affairs said it will lift the current ban on applying for two houses at one time starting today in order to help boost the housing market.

Under the current system, applicants who win ownership of an apartment from a draw are banned from bidding for another apartment for five years, especially if the apartment is located in the Seoul metropolitan area and is over 85 square meters (915 square feet). The ministry said it will lift the ban until March 31.

The land ministry also removed the biggest barrier for foreigners who want to buy houses in the country. According to guidelines set out by provincial and city governments, foreigners will be able to purchase apartments beginning today, even if they do not hold Korean identity cards.