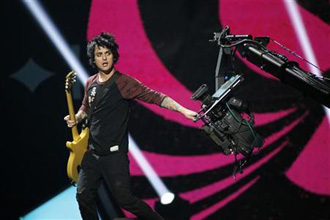 The statement, which apologized for the abrupt and acrimonious end to the band’s appearance on Friday, came as Green Day was due to launch today an ambitious trilogy of albums, their first collection of new music since 2009.

Performing at the iHeartRadio Music Festival in Las Vegas, Armstrong, 40, suddenly quit playing and launched into an expletive-laden tirade when signaled mid-song that the band had one minute left.

“Gimme a ... break. One minute left? ... You gotta be ... kidding me,” Armstrong shouted from stage in seeming disbelief. “Let me show you what one ... minute means,” he finally said, before he and bass player Mike Dirnt smashed their instruments and walked off.

Footage of the incident, which drew cheers of support for the band, was posted on YouTube.

Three weeks ago, the Green Day front man was briefly hospitalized in Italy for what was later described by Dirnt as a severe case of dehydration, forcing cancellation of a weekend concert. But Armstrong was well enough to perform with Dirnt and drummer Tre Cool several days later at the MTV Video Music Awards show on Sept. 6.

No details were given about the nature of Armstrong’s latest difficulties, and the band’s representatives could not immediately be reached for comment to elaborate on the terse Web site statement.

“Billie Joe is seeking treatment for substance abuse,” it said. “We would like everyone to know that our set was not cut short by [event promoter] Clear Channel and to apologize to those we offended at the iHeartRadio Festival in Las Vegas.”

The flap over the Las Vegas show and the disclosure that Armstrong is entering rehab come as the band was preparing to release its latest album, “Uno!” today, to be followed in November and January by two more LPs, “Dos!” and “Tre.”

Green Day also is scheduled to begin a U.S. tour Nov. 26 in Seattle.

The band’s last album of new music, “21st Century Breakdown,” came out in 2009, and the following year its wildly successful and politically charged 2004 rock opera, “American Idiot,” was transformed into a hit Broadway musical that starred Armstrong himself.