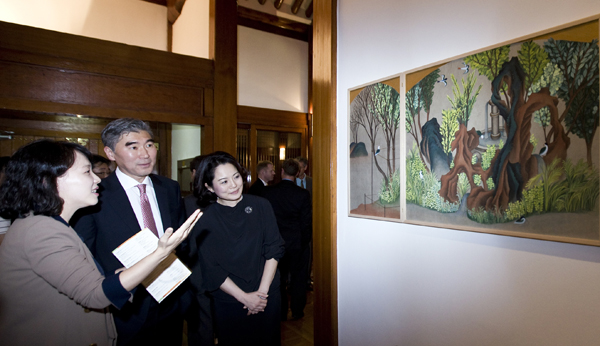 U.S. Ambassador Sung Y. Kim, center, and his wife, right, listen to artist Lim Hyun-Kyung’s explanation of her painting, which is part of the “Context Revisited” exhibition at the ambassador’s residence in Jeong-dong, central Seoul, on Friday evening. The exhibition is part of the U.S. Art in Embassies program. By Kwon Hyuk-jae


It is customary for U.S. ambassadors to express their tastes in fine art through the country’s Art in Embassies program, which encourages envoys to fill their residencies with art works that they choose from the United States or the host countries as part of cultural diplomacy.

The Habib House, the residence of the U.S. ambassador to Korea, now presents new works by Korean and Korean-American artists, which Ambassador Sung Y. Kim has chosen since he took the position in November.

“My wife and I did a lot of research and very seriously negotiated [which art works would be included in the exhibit],” Kim, 52, said at the opening of the exhibition at the Habib House, a modernized hanok (Korean traditional house) located near Deoksu Palace in central Seoul on Friday evening.

The exhibition titled “Context Revisited” consists of 19 pieces including paintings, sculptures and photographs by 12 artists.

Three of the 12 artists including the 41-year-old Jean Shin are Korean-Americans. And many of the other nine also studied art or are based in the United States.

“I chose mainly Korean-American artists or Korean artists who have some connection with the U.S. so that the exhibition could be a cultural bridge between the two countries,” Kim told the reporters.

At the entrance of the Habib House’s music room is a work by Kang Ik-joong. The colorful mosaic made of panels of 3 by 3 inches, some of which are attached with various objects, shows the Korean-born, New York-based artist’s signature style.

Kang, 52, is well known for his public art pieces including a big screen that covered the Gwanghwamun, the southern gate of Gyeongbok Palace, during its repair between late 2007 and mid-2010.

And from the ceiling of the music room are hanging translucent lotus sculptures by the 35-year-old Sungmi Lee, which creates a dreamy ambience.

On the wall of the dining room is Koo’s photo of a moon jar. And from the ceiling of the room is a big chandelier-like sculpture made of decorative metals removed from security gates. It is a work by Shin titled “Translated Ornament.”

On the wall of a main entrance to the Habib House is an oil painting by the 37-year-old Nam Kyung-min. Her paintings of bright colors on the border between reality and illusion are becoming popular among local collectors. The other artists are Kang Han Maro, Sim Seung-wook, Namgoong Whan, Mina Cheon, Kim Heechan and Byun Si-jae.

The U.S. State Department’s Art in Embassies program was first envisioned by the Museum of Modern Art in New York in 1953 and formalized by the John F. Kennedy administration in 1963,

The opening was attended by about 80 guests including government and museum officials.