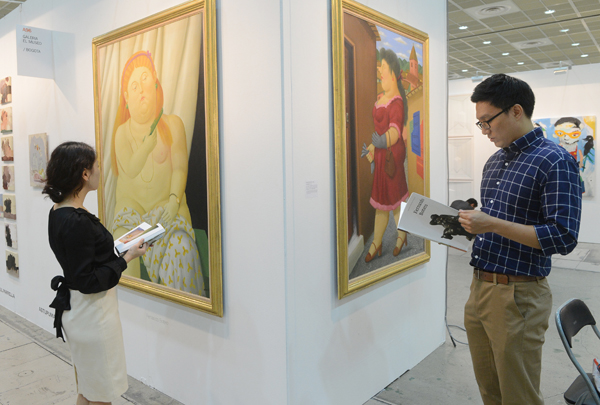 Art viewers look at works by Colombian Fernando Botero during the 2012 Korea International Art Fair held from Sept. 13-17 at the COEX Convention Center in Gangnam District, southern Seoul. The regional focus this year was Latin America, celebrating the 50th anniversary of diplomatic ties between Korea and Latin America. [NEWSIS]


Marking the 50th anniversary of the establishment of diplomatic ties between Korea and Latin America, the 2012 Korea International Art Fair, which concluded last week, celebrated Latin American artwork with 8,500 visitors over the course of five days.

The 11th edition of this annual art fair was held from Sept. 13-17 at the COEX Convention Center in southern Seoul and exhibited artwork from 20 countries and 181 Korean and international galleries.

Galleries specializing in Latin American art from Argentina, Chile, Colombia, Mexico, the Dominican Republic, Uruguay and Venezuela were invited to the fair this year, which featured the works of 84 Latin American artists.

One of the Argentine artists featured was Liliana Porter, who is currently based in New York and explores different media including canvases, prints, collages and installations to express the “human condition.” The artist’s works were presented at a Uruguayan gallery, Del Paseo, including a video project.

Praxis International Art, which was founded in Buenos Aires in 1977 and has branches in New York, was one of the Argentine galleries representing Latin American contemporary artwork.

Ahead of the art fair, Carlos Alberto Arganaraz, the Argentine ambassador, hosted a reception in honor of the Argentine artists at his residence in Yongsan District, central Seoul.

“While Latin American artwork is unfamiliar to many Koreans, the galleries still attracted interest from visitors over the past several days,” said the fair’s organizers. “I think Koreans will show more interest in Latin American artists after this fair.”

“Mujer Entrando a Su Casa,” a painting of a plump woman by Colombian Fernando Botero, one of the top-selling artists at the fair, was one of the most popular pieces, organizers said.

“I did not know much about Latin American artwork before I went to the art fair,” said a 24-year-old college art student who attended the fair last year. “But I was interested in seeing all the different media used and the bright colors.”