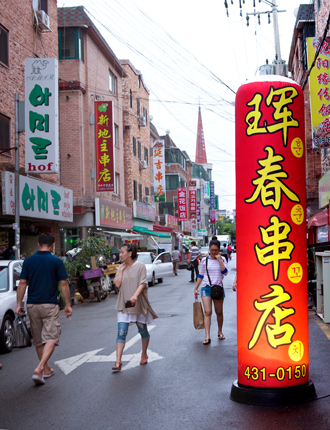 Siheung’s Jeongwang-dong in Gyeonggi has the third highest density of non-Korean-speaking residents in the country, after Wongok-dong in Siheung and Guro-dong in western Seoul. Shops with foreign-language signs attract multinational customers in the area. By Park Jong-keun

A Bangladeshi man surnamed Habible always visits Jeongwang-dong in Siheung, Gyeonggi, on the weekends from Ansan, south of Seoul, where he lives. There is a multicultural designated area in nearby Wongok-dong, but he never skips a trip to Jeongwang-dong.

In the morning during his visit, Habible goes to a welfare center for foreigners to take computer classes. Then he visits the local market in the neighborhood to go shopping and enjoy lamb skewers with his friends.

“Wongok-dong gets too crowded on the weekends whereas Jeongwang-dong is considered much cleaner and quieter,” Habible told the JoongAng Ilbo.

“For foreigners, Jeongwang-dong is a place to go.”

Siheung’s Jeongwang-dong is emerging as one of the most visited multicultural zones. The number of non-Korean-speaking residents has doubled to 20,768 this year from 11,039 in 2003. Foreigners residing in Jeongwangbon-dong and Jeongwang 1-dong, which make up the Jeongwang-dong area, account for more than half of the city’s total number of aliens with 14,905.

The city comes in third in terms of the highest number of foreigners living in a given area in the country, following Siheung’s Wongok-dong and Guro-dong in Guro District, western Seoul. More than 100 nationalities are represented in Jeongwang-dong.

One factor contributing to Jeongwang-dong’s rising popularity is its location. Near the zone is the Siheung Smart Hub, formerly known as the Sihwa Industrial Complex. Most foreigners residing in Jeongwang-dong are employed at the Siheung hub.

Jeongwang-dong also provides multinational workers with quality housing as most apartments were built less than five years ago.

“I’ve lived for seven years here as housing rents are cheaper,” said a 27-year-old female Mongolian worker. Housing in Jeongwang-dong does not require deposits and provides one-room studios for between 150,000 to 300,000 won ($134 to $268) per month.

“Housing prices in Wongok-dong have jumped since its designation as a multicultural zone, giving foreign workers another incentive to flock to Jeongwang-dong,” said Lee Jeong-mi, who runs a real estate agency in Jeongwang-dong.

Another factor that draws a lot of foreign workers to Jeongwang-dong is that the area has much lower rate of crime than other areas with a high density of alien residents.

The influx of foreigners in Jeongwang-dong has also led to an increased number of shops run by foreigners. The number of such shops has now reached over 85, a drastic jump from three years ago when there were less than two dozen such shops in the area.

“With more shops catering to foreigners, multinational people are increasingly choosing Jeongwang-dong over other areas to enjoy their weekends,” said Oh Seong-ho, a Korean-Chinese who operates a mobile phone shop in the area.