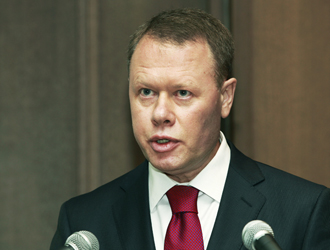 “We [Korea and Ukraine] have a lot of potential [in boosting partnership], mainly in the areas of economy and trade,” Marmazov said in an interview with the Korea JoongAng Daily last week. The Ukraine Embassy hosted a reception at the Shilla Hotel in central Seoul, inviting Korean officials including Park Ro-byug, ambassador for energy and resources at the Foreign Affairs and Trade Ministry, and lawmaker Ahn Hong-joon, chairman of the National Assembly’s Foreign Affairs, Trade and Unification committee, as well as dozens of foreign guests.

“My country is looking forward to promoting good projects with Korean companies,” the ambassador said.

Marmazov hoped that more projects will be implemented like the 2010 deal that called for Hyundai Rotem to provide Ukraine with high-speed trains. The deal was sealed at a time when Ukraine was working to improve its transportation system for the 2012 European Football Championship, which attracted about 2 million foreign visitors.

Korea and Ukraine established diplomatic relations in 1992 and over the past two decades have boosted ties in various areas.

“Political dialogue has been maintained at all levels,” Marmazov said.

He added that in recent years in particular, trade, economic and financial cooperation has expanded; cultural and humanitarian contacts have deepened; scientific, technical and educational cooperation has strengthened; and the number of tourism and youth exchanges has increased. In the first half of this year, bilateral trade reached $1.13 billion, a 40.6 percent increase compared to the same period in 2011.

The improvements were supported by more frequent contact among high-level officials.

“As for tourism, Ukraine has a rich cultural and historical heritage that can be experienced by visits to ancient churches, monasteries and castles,” he said, urging more Koreans to visit his country.

The embassy will also be holding a cultural event titled “Days of Ukraine Culture” in Korea in November as part of the celebration of 20 years of diplomatic relations.

The ambassador also noted there are more than 30,000 ethnic Koreans residing in Ukraine and the two governments have “entered into constructive cooperation on solving the current issues of their residence.”

For example, the Ukraine government has established a special committee on ethnic Koreans, including representatives of the Korean Embassy in Ukraine and the Association of Koreans in Ukraine, as well as Ukrainian government officials.

“I would like to note that Ukrainian-Korean cooperation has very good prospects,” he said.

“Today, we have favorable conditions for bringing relations between our countries to a qualitatively new level.”