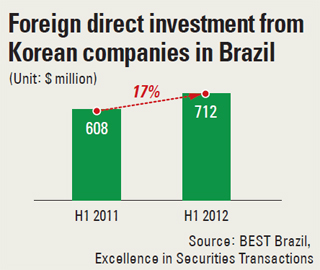 Although some local investors complain that their yields from Brazilian bonds have shrunk since last year due to the depreciating Brazilian real, a delegation from the country visited Korea this week to sell them on the prospects of the financial market’s future prospects.

A delegation of Brazilian government officials and executives from the private financial sector said there is a high chance of Brazil’s financial market growing and urged Korean investors to snap up stocks and bonds.

“Brazil’s market policy is very solid and the financial system is robust,” said Emanuel Freire, a senior official at the Central Bank of Brazil, during a press conference at the Westin Chosun Hotel in central Seoul yesterday.

“We have had, for the last 10 years, sustainable degrees of debt-to-equity ratio. This is very special, because while many countries increased their indebtedness, Brazil has in the last few years experienced the exact opposite. We’ve started a positive cycle of reducing government debt and that makes us an attractive destination.”

The delegation will soon kick off its “Best” road show, which stands for “Brazil, Excellence in Securities Transactions.” The aim is to promote the country’s capital and financial markets by inviting Korean investors, investment and pension fund administrators and asset managers to the hotel this afternoon to listen to the reasons why this opportunity should not be missed, they said.

Freire said the growing interest in Brazil is due to its safe and sophisticated financial system, and this is also the case among Koreans.

Korea’s foreign direct investment (FDI) in Brazil has shot up to $712 million in the first half of this year, marking an on-year rise of 17 percent, according to Brazilian financial authorities.

The foreign investments will help the country reap long-term growth by improving the quality of its education and infrastructure, which include laying railway tracks and building plants and logistics centers, Freire added.