Snedeker delivers in the FedEx Cup

Snedeker delivers in the FedEx Cup 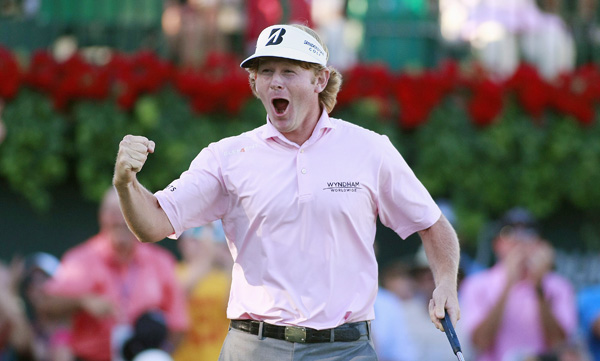 Brandt Snedeker of Nashville reacts after winning the Tour Championship and the FedEx Cup on Sunday at East Lake Golf Club in Atlanta. He won the title over many of the world’s best players, including Rory McIlroy and Tiger Woods. [REUTERS/YONHAP]


ATLANTA - Brandt Snedeker played the biggest round of his career for the biggest payoff in golf.

Needing to win the Tour Championship on Sunday to beat out Rory McIlroy for the FedEx Cup, Snedeker came up with three big birdies on the back nine at East Lake to take all the drama out of a final day that had been loaded with possibilities.

Snedeker hit his final tee shot into the grandstand left of the 18th green and made bogey. By then, it didn’t matter. So dominant was his performance that he was the only player from the last five groups who managed to break par, closing with a two-under 68.

Along the way, he answered any questions about why Davis Love III made him a captain’s pick for the Ryder Cup next week at Medinah.

Snedeker won by three shots over Justin Rose (71) in the Tour Championship, his second title of the year, and collected $1.44 million. And he won the $10 million bonus for capturing the FedEx Cup, which comes with a five-year exemption on the PGA Tour.

McIlroy and Tiger Woods, both of whom could have won the FedEx Cup with a victory Sunday, faded early and were never a factor. Snedeker joins Woods (twice), Vijay Singh, Jim Furyk and Bill Haas as winners of the FedEx Cup in its six-year history.

McIlroy had won the last two playoff events and three of his last four tournaments dating to his eight-shot win in the PGA Championship. He still is virtually a lock to be voted PGA Tour player of the year, but he had to settle for second in the FedEx Cup.

It was an emotional week in so many ways for Snedeker, already a high-strung personality. His father, Larry, flew in to watch the final round at East Lake, only the second tournament he has attended since having a liver transplant last year.

Snedeker stopped by a hospital in Atlanta to visit Tucker Anderson, the son of his swing coach who was critically injured in a recent car accident and remains unable to speak.

“I asked him if he thought I was going to beat Rory McIlroy, and he gave me a wink,” Snedeker said.

He beat everybody at East Lake in a convincing fashion. After taking a double bogey on the par-3 sixth when he hit his tee shot into the water, Snedeker responded with a 40-foot birdie putt on the eighth, an 18-foot birdie putt on No. 13, and chipping in from short of the 17th green to end all doubt.

“I had complete confidence in what I was doing,” Snedeker said.

Meanwhile, Stacy Lewis fired a three-under par 69 on Sunday to win the $1.3 million Navistar LPGA Classic in Prattville, Alabama - her third title of the year and a jump from third to second in the world rankings.

Lewis, whose only prior career title came at a major in last year’s LPGA Kraft Nabisco, finished at 18-under 270 for 72 holes to beat defending champion Lexi Thompson by two strokes. The U.S. teen star fired a closing 66.

“You have to hit it good here and hit some tricky putts,” Lewis said. “It’s stressful, this course. Somebody can get on a good run and make a lot of birdies. And 16, 17 and 18 are tough finishing holes.”

Lewis also took the Shoprite LPGA Classic in June and the Mobile Bay LPGA Classic in April, where she also held off a final round charge by 17-year-old Thompson for a one-stroke triumph.