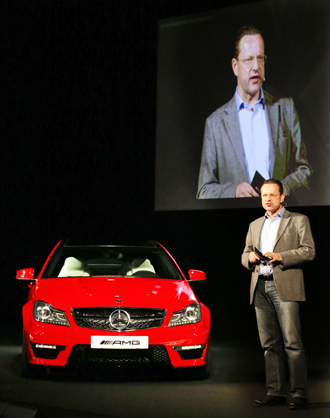 Thomas Urbach, the CEO and president of Mercedes-Benz Korea, poses with the C63 AMG, one of two new C-Class coupes introduced by the German automaker to the Korean market yesterday, at the Hyatt Hotel in Hannam-dong, central Seoul. Provided by the company

At a media workshop to introduce the new models and the rest of the upgraded 2013 C-Class line-up, Thomas Urbach, president and CEO of Mercedes-Benz Korea, said carmaker is also now targeting a broader bandwidth of customers.

Generally, the carmaker’s coupes have been performing well compared to other Mercedes-Benz models in Korea. Their sales tripled in the first eight months of the year compared to the same period in 2011, although overall sales still trail BMW and Audi.

“In terms of sales, it is true that we lag behind BMW and Audi. While we posted 5 to 6 percent sales growth last year compared to the previous year, BMW and Audi both have posted two-digit sales growth. However, we mainly focus on customer satisfaction and providing the best-quality dealership and after-sales services to our customers,” Urbach said.

He said that as domestic demand for models such as the CLS350, E350 and CLS63 AMG continues to grow here, the automaker has struggled to supply enough vehicles to the market.

“The coupes have been a great success for us, and they have enjoyed a fantastic reception in Korea,” said the CEO, who was speaking at the Hyatt Hotel in Hannam-dong, Seoul.

“We are [also] revamping our complete model year 2013 C-Class line-up. In order to meet growing demand in the diesel segment, we are offering a new and attractively priced diesel entry model,” he added.

The new CDI Coupe is competitively priced at 57 million won ($50,858) to meet the growing demand from young customers, while the AMG starts from 99 million won.

“As Korean consumers are getting younger and younger, not only with the C-Class line-up, but also in general, such as with the E-Class and S-Class, we plan to further increase our range of dynamic and sporty models,” he said.

“We expect the average age group of our customers will go down even further, as average income levels of young people are growing.”

The two versions of the new Coupe introduced during the media workshop were the C220 CDI and C63 AMG, both mounted with improved navigation systems adapted for local customers. The systems took five years to develop, he said.

He said the carmaker will also sell a special, limited-edition version of the C63 AMG Coupe to mark its release here. This will be restricted to 10 units.

“In Korea, similarly priced German cars such as BMW’s 3-Series convertible and Audi’s A5 will be the rivals for our new coupe,” said Matthias Laznik, vice president of sales.