LG Electronics has filed a lawsuit against Samsung Electronics for uploading a video clip on YouTube that accuses LG of inflating the capacity of one of its refrigerators.

LG said yesterday it has filed an injunction with the Seoul Central District Court to block the video, claiming Samsung is wrongfully accusing its rival.

“It is regrettable that Samsung has gone so far as to violate the law with malicious commercials that mislead consumers and degrade its rival,” said Yoon Kyung-seok, head of the refrigerator research center at LG. “We cannot just sit by and watch this kind of unfair competition and defamation perpetrated by Samsung.”

He said if Samsung doubts the veracity of LG’s claims about its products, it can mobilize a government-authorized third party to verify the capacity. 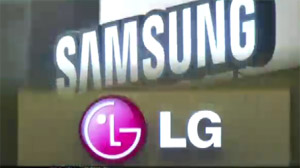 The dispute was sparked on Aug. 22 when Samsung uploaded a commercial entitled the “Inconvenient Truth about Refrigerator Capacity.” The video shows Samsung employees pouring water into its 857-liter (226-gallon) fridge and LG’s 870-liter rival. Despite the 13-liter difference, Samsung said its product could take 3.4 more liters.

Almost a month later, LG sent a warning to Samsung to immediately pull the commercial. It also requested an apologetic gesture and asked that employees involved in making the video be punished. However, Samsung uploaded another video to hammer home the same message.

Samsung said in a statement yesterday that the videos were aimed at helping buyers, for whom a fridge’s capacity is a key concern, understand the product, a move it said was aimed at forming a fair competitive environment.

The lawsuit comes as the home appliance giants vie to release the world’s biggest fridge. In July, Samsung unveiled the 900-liter Zipel T9000, while LG followed up with its 910-liter Dios V9100.