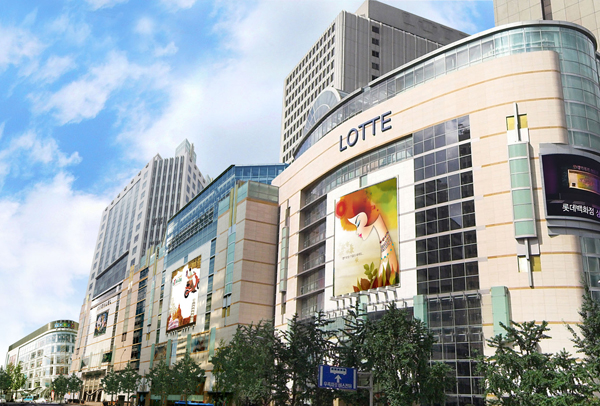 
Lotte Shopping has been included in the Dow Jones Sustainability Indexes World for the fourth year in a row, it was announced on Sept. 13. In addition, it has been named a “supersector leader” for the third year in a row, a first for a Korean company.

The DJSI evaluates global companies’ financial health, environmental factors and economic factors such as organization structure and management of subcontractors.

It also uses social criteria such as a company’s social contribution and stakeholder participation. The international index is considered a global standard in sustainable management.

A total of 19 Korean companies were included in the world version of the index, including Lotte Shopping, Samsung Electronics, GS E&C, and KT, but Lotte Shopping is the only retail company among the bunch.

In addition to its four years on the sustainability index, it was named fourth in the world department sector of Global 2000 Leading Companies by U.S. economic magazine Forbes. Such worldwide recognition is acknowledgement of the effort Lotte Shopping has devoted to becoming a global company.

Furthermore, Lotte Shopping has been named as a supersector leader in the retail industry for three consecutive years. This index identifies top companies as leaders in 19 industries such as finance, retail, and food and beverage. In the retail sector, Lotte Shopping received the top score this year.

In terms of social contribution, Lotte Shopping launched the Happy Dream Volunteers Team and established sisterhood relationships with overseas children. The company is working hard on other, socially responsible projects, as well.

Overall, Lotte Shopping is trying to achieve its vision “2018 Global Top 5” by working hard to be socially responsible and to establish a sustainable management system that fits its vision.

It has promoted a unique greenhouse gas inventory setup for the first time in the industry and has a system to manage and reduce the impact that its industrial activities have on the environment. In addition, the company is expanding its global social work through initiatives such as the Vietnam Lotte School construction project and the China Health Happy Dream Medical Volunteer World program. Lotte Shopping is also participating actively in campaigns at home, including a birth promotion initiative, which involves families with more than three children. Its “A room for loving mothers” bus promotes giving birth, one-night camping with fathers and more.

“The fact that Lotte Shopping has been included in the DJSI World ranking for four years in a row and was named a supersector leader for three consecutive years means that our management has been acknowledged for its achievements,” Lotte Shopping President and CEO Shin Heon said. “Lotte Shopping’s sustainable management system has met the global standard. We will continue to do our best so that Lotte Shopping can become a world-leading retail company as well.”