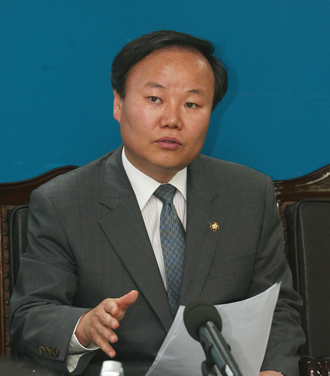 Following an angry outburst at reporters during his first day on the job, a newly appointed spokesman of the Saenuri Party yesterday admitted his mistake.

“I am mortified,” Representative Kim Jae-won said in an interview on YTN radio. “It is my fault and it is true that I lost my reason at the time.”

Kim, who was appointed Sunday as a new joint spokesman of the conservative ruling party, made the remarks during a dinner meeting with a group of reporters the same day.

“While we were having private conversations, some of the reporters informed their editors about some exaggerated information, which I didn’t even say,” Kim said. “And after a short while, it was delivered back to me. I felt disappointed and frustrated about the process and protested.”

Kim was appointed to succeed Representative Hong Il-pyo, who resigned after a chaotic media briefing on the position of Park Geun-hye, the Saenuri Party’s presidential candidate and daughter of late strongman Park Chung Hee, on the wrongful execution of political prisoners during her father’s rule. On Sept. 12, Hong said the Saenuri Party admitted that Park’s remarks could be misleading and issued an apology. Forty minutes later, Park’s spokesman denied the apology and Hong later quit.

During his dinner with reporters, Kim explained that Park would present a significantly different view on her father’s rule at a press conference scheduled for yesterday morning, and he likened it to the apostle Peter’s denial of Jesus. He also allegedly said Park entered politics to restore her father’s honor.

The comments by Kim were being reported while the dinner was still in progress, and Saenuri officials telephoned Kim to ask if he made the remarks. Enraged, Kim yelled at reporters, pointing at each of them and asking who told their editor. He also said he got a telephone call from Park.

“You idiots,” Kim told reporters. “All the information that you tell your editors eventually comes back to us.”

At one point, Kim mocked the reporters, asking, “Are you sure you’re actually university graduates?”

Kim later said the incident an honest mistake. “I wasn’t even drunk,” he said. And he denied the remark about Park entering politics to restore her father’s honor.

“You can say the appointment is postponed for now,” said a council member.