After 6 months, a U-turn on costly free day care

After 6 months, a U-turn on costly free day care 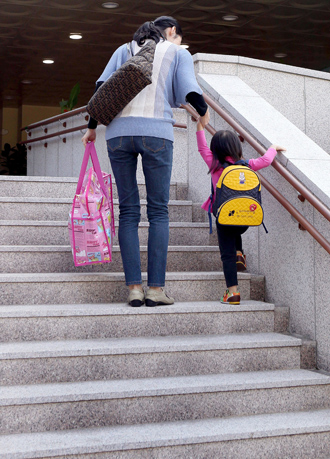 A mother drops her daughter off at a day care center in Gangnam District, southern Seoul, before heading to work. The free day care program for toddlers under 2, implemented in March, will be changed by next March. By Shin In-seop

The wheels appear to be falling off the welfare bandwagon as local governments and the national government realize they can’t afford some promises made by political parties.

Just half a year after the controversial free day care program for all toddlers under 24 months was implemented, the Ministry of Health and Welfare said yesterday the system had to be overhauled because it’s just way too expensive.

The ministry announced a new day care program that will exclude households in the top 30 percent income bracket.

In March, the government instituted free day care for all toddlers under the age of 2 regardless of how rich their families are. Both the ruling and opposition parties approved the idea, which was inspired by the free school lunch program in Seoul.

All parties have included more welfare benefits in their platforms leading up to the presidential election in December.

A chain of district offices in Seoul, as well as provincial and municipal governments throughout the nation, have already announced that they are running out of money for their day care budgets or will in the next few weeks.

Critics of the free day care system point out that because it is free, more families took advantage of the program, driving up costs.

If the ministry’s plan is approved by the National Assembly, starting in March 2013, households in the lower 70 percent income bracket - regardless of whether they send their toddlers to day care centers or not - will receive between 100,000 won ($89) and 200,000 won in cash per month for child support, depending on the toddler’s age.

Currently, only families in the lowest 15 percent income bracket who do not send their toddlers to day care centers receive cash support.

Households in the top 30 percent income range will not be eligible for the cash support, which translates into some 407,000 toddlers,

The ministry said that while the total budget for day care will not be decreased, payments to all families, regardless of their income levels, will require an additional 642 billion won in total budget.

The ministry said that it will further reduce spending by cutting down on providing vouchers for whole-day programs at day care centers. Currently, the government provides free day care support based on the cost of a 12-hour day care program.

In the new system, only parents who work full time will be given vouchers for whole-day care.

Parents who only need half-day care for their toddlers will get those vouchers. The government can save money by providing whole-day vouchers only to eligible families.

“While planning the reform measures, we had many worries and were faced with limitations, but we believe that we established a system that can meet users’ needs,” said Health Minister Rim Chae-min yesterday after apologizing for the confusion caused by child care policies.

“We have to make a better environment for children to grow in,” he said. “For toddlers under 36 months, time spent with their mothers should be increased, and for mothers who have to work, we will provide support.”

But the new plan is likely to face blowback from all parties in the National Assembly because they know that more welfare is popular with voters.

Representative Chin Young, chief policy maker of the ruling Saenuri Party, said yesterday the plan to scrap free day care was “not acceptable” and that “providing free day care for toddlers under 2 regardless of class stratum was our election pledge and part of our party platform.”