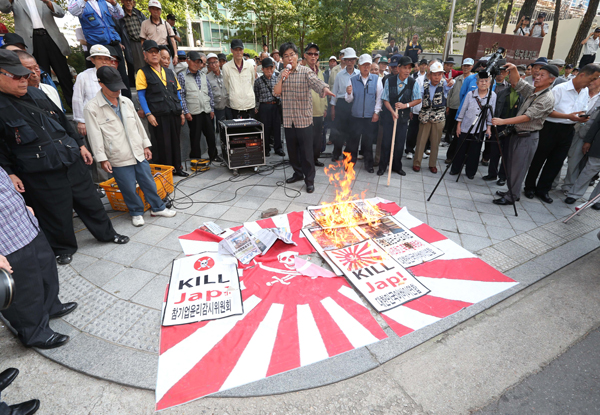 Protesters burn posters outside the Japanese Embassy in Seoul yesterday. Dozens of protesters, who were from various conservative civic groups, demonstrated against the Japanese Prime Minister Yoshihiko Noda’s comments on the issue of sexual slaves. [YONHAP]

“There were several incorrect and unfair remarks made by Prime Minister Noda in the interview,” a senior government official told reporters yesterday. “And we would like to have our say on them.” 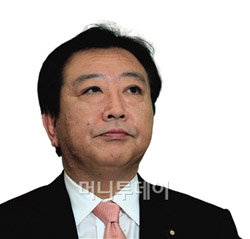 According to the interview in yesterday’s edition of The Wall Street Journal, Noda commented that “the matter [of providing compensation to the so-called comfort women] is closed.” Noda continued: “Korean criticism that Japan’s previous offerings were insufficient hurt the feelings of the conscientious Japanese, and it is a pity. .?.?. In the long negotiation process, we have completely and legally resolved the matter of compensation.”

Noda was referring to the negotiation of the 1965 treaty that normalized ties between Korea and Japan. While the Seoul government has been demanding an official apology and compensation for the women, Tokyo claims the issue was settled with the treaty and payments made at the time, and that Korea has no further claims for wartime compensation.

“The Japanese government hasn’t provided any compensation based on a legal responsibility,” the senior government official said.

“Sexual slavery is a non-humanitarian, illegal practice, and the issue wasn’t even discussed in the negotiations over the 1965 treaty,” the official said. “The issue hasn’t been solved yet.” Noda also said that the Japanese government “went out of its way to jointly set up a fund in 1995 with private donations to provide the former comfort women with compensation.”

“Setting up the fund was meant to evade legal responsibility,” the senior official said, “and because the fund emphasized humanitarian support, a majority of the victims of wartime sexual slavery didn’t accept the compensation from that fund.”

Compensation should come directly from the Japanese government, not the private sector, the official said.

In the interview, Noda also said that Seoul and Tokyo have been conducting behind-the-scenes negotiations on the matter and “we [Japan] need to advertise this fact [that the two are working together] to the international community.”

“There have not been any concrete negotiations between Korea and Japan over the matter since July,” the Korean official said.

Korea’s government has been more proactive in its efforts for the comfort women since August 2011 when the Constitutional Court said the government was denying the former sex slaves their right to happiness because they haven’t solved the problem. In September and November of last year Korea officially proposed a bilateral meeting on the subject but Japan didn’t respond.