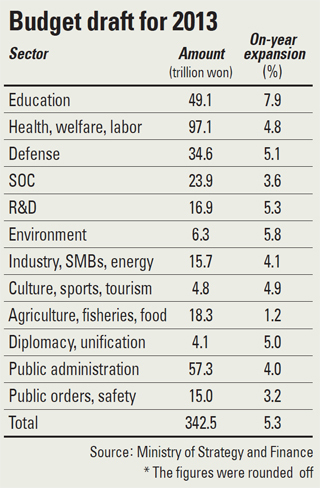 The government has released a budget proposal for 2013 that places a fresh accent on welfare and education while refusing to jettison its goal of achieving a balanced budget.

The Ministry of Strategy and Finance announced yesterday a 5.3 percent increase in the government’s spending for next year, raising the total to 342.5 trillion won ($306 billion). The target revenue is set at 373.1 trillion won, up 8.6 percent from this year.

Due to pressure related to the upcoming presidential election and other political issues, the ministry “decided to focus on boosting economic vitality,” said Kim Dong-yeon, deputy finance minister. “The government expanded fiscal spending as much as possible within the parameters of maintaining a budget balance.” 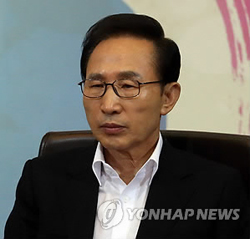 According to the draft budget that will be sent to the National Assembly for approval on Tuesday, the ministry earmarked 97.1 trillion won for health, welfare and labor affairs, up 4.8 percent from this year.

The welfare budget accounts for over 28 percent of the total proposed outlays next year. If approved by the Assembly, it would make 2013 the third consecutive year of record welfare spending. Customized welfare services by age group form the nexus of this part of the proposal.

For infants, the government has opted to include meningitis vaccinations in the national immunization program in addition to the 11 vaccinations already provided.

Aid for multiethnic families will be increased by 9.4 percent, and they will be offered free consultation services. Programs to help immigrants assimilate into Korean life will be enhanced, including help learning the Korean language, interpretation services, mentoring courses and cultural activities.

Financial aid for North Korean defectors will be increased from 6 million won per person to 7 million won.

Subsidies for university students from low-income households got the largest boost in the draft budget as the ministry earmarked 49.1 trillion won for education, up 7.9 percent from this year.

Of this, some 2.25 trillion won will be funneled into scholarships, while student loans will be expanded to 1.9 trillion won. Support for student housing will also rise.

The government decided to double its financial aid for after-school activities for children from low-income families and young people with disabilities to 12.1 billion won.

The budget for a public education course called “Nui Course,” for toddlers aged 3 and 4, will also expand to 3.1 trillion won.

With the goal of providing 589,000 jobs in the public sector next year, the government aims to add 25,000 new posts through government projects.

Those who participate in the government-run Employment Success Program will be paid an attendance allowance of 400,000 won a month, up 25 percent.

Unemployment benefits and social security insurance will be made available to more people. Those aged 65 or older will be eligible for unemployment entitlements, while those earning less than 1.3 million won a month can apply for a national pension and employment insurance.

Spending on national defense will also climb 5.1 percent to 34.6 trillion won, and the government set aside 4.1 trillion won for projects linked to foreign relations and reunification, up 5 percent from this year, according to the ministry.

The spending plan calls for 16.9 trillion won to be dedicated to research and development, 5.3 percent more than this year. The government also plans to increase expenditures on social infrastructure by 3.6 percent to 23.9 trillion won.

The ministry expects income tax revenue to amount to 50.6 trillion won in 2013, up 5.4 trillion won from this year’s estimate. This means that each worker would have to pay 320,000 won more on average.

The budget plan is based on the premise that the nation’s economy will expand 4 percent next year.

Experts are critical of the budget proposal, saying the government appears to be overly optimistic regarding what it can achieve.

“As the recession is forecast to continue, it is uncertain whether the government will reach its targeted revenue next year,” said Kang Joong-koo, a researcher at LG Economic Research Institute. “Increasing spending at this time suggests that fiscal soundness is already being threatened.”

“The Finance Ministry should have been more conservative,” said Song Won-geun, a researcher at the Korea Economic Research Institute. “The 4 percent growth forecast is too optimistic.”