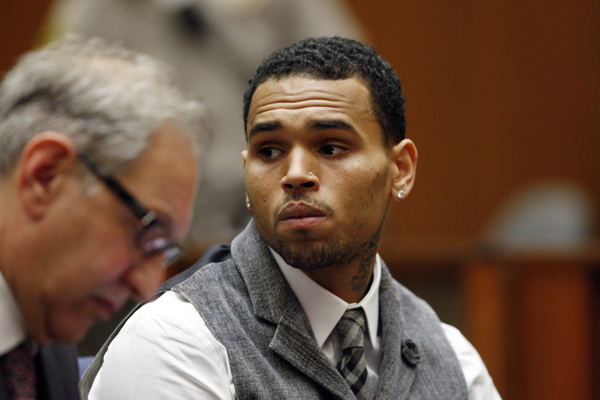 LOS ANGELES - R&B singer Chris Brown has tested positive for marijuana, leading a Los Angeles judge on Monday to set a November hearing to decide whether he violated his probation stemming from a 2009 assault on then-girlfriend Rihanna.

According to a probation report presented in court, Brown tested positive in June in Virginia, where he is fulfilling his community service, Los Angeles Superior Court Judge Patricia Schnegg said. Brown, who is midway through a five-year probation sentence, produced a medical marijuana card after the positive test, Schnegg said.

Schnegg said mandatory drug testing was not a condition of Brown’s probation. But she scheduled a Nov. 1 hearing to decide whether he had violated his probation on that and other matters, including travel restrictions and fulfillment of his community service.

Schnegg gave Brown, 23, a warning in court, reminding him that he was a role model.

“You are not an ordinary person who can sit in your living room and do whatever you want to do,” Schnegg told the “Turn Up the Music” singer. “More importantly, a lot of people look up to you, a lot of kids. What you do and what you say impacts a lot of people.”

Brown’s lawyer, Mark Geragos, said his client had “completed all of his community service.”

Brown, who won a Grammy award earlier this year, was sentenced to five years of probation and six months of community service after pleading guilty to criminal assault for beating Rihanna on the eve of the Grammy Awards in 2009.