Rain in the hospital with bad back

Rain in the hospital with bad back 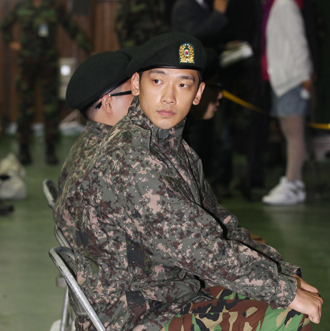 Hallyu singer Rain, currently serving in the military, has been hospitalized due to his ailing back.

A representative from the Defense Media Agency announced that on Sunday, “Jung Ji-hoon complained of sudden pain around his waist and was taken to a nearby hospital.”

The spokesman said the singer had been set to appear as a judge Monday on a military-based singing-audition show, but due to his injury, he couldn’t make it.

Although Rain was recovering from spinal disk pain as of early Tuesday, his scheduled performance at a concert later in the day for the upcoming Armed Forces Day looked doubtful.

Meanwhile, some have speculated that the 30-year-old may be pulling a sickie to get an early discharge.

Rain entered the Army last October and is serving in the PR division. He has taken part in various concerts and events staged to promote the armed forces.

Last month, he was released for vacation and was sighted watching his own movie “R2B: Return to Base.”