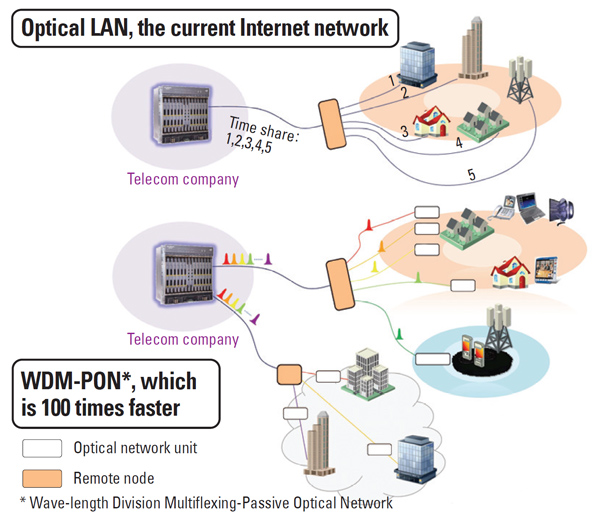 Commercial Internet speeds will jump 100-fold next year and Korea is lighting the way for these game-changing technological advances, the state-run Electronics and Telecommunications Research Institute (ETRI) said yesterday.

The ETRI demonstrated the speed of its newly developed Internet network, the wavelength division multiplexed-passive optical network (WDM-PON), yesterday in the lobby of the Ministry of Knowledge Economy in Gwacheon, Gyeonggi.

The research center set up two computers, one connected to its current network and the other to the new WDM-PON, to show how it was already possible to download the same 350-megabyte video at 100 times the speed.

It took 1 second to download on the new network and 28 seconds on the current network, or Optical LAN.

“Such technology can send 10 gigabytes of data per second,” he added. Current Internet networks can only send 100 megabytes per second, meaning they are 100 times slower. One byte is equal to eight bytes.

The enhanced speed was made possible by assigning users separate wavelengths on the lasers that are fired down fiber optic cables, rather than having them share wavelengths, Lee said, adding that this is also groundbreaking technology exclusive to Korea.

“It is like driving alone on an empty road,” he added. “We think it would be reasonable for the service providers to double their fees for this faster service.”

Consumers will also need a new machine that connects them to their own wavelength. This is expected to cost around 120,000 won ($107) at first then fall as more people migrate over.

“When the first wireless Internet was introduced, the router cost around 180,000 won,” said Lee. “But the price dropped over the course of a few years when it became mass-produced.”

The new network was created as part of the government’s “World’s No. 1 Research” project. Some 14 research institutes including ETRI have been working on 43 projects.

Twenty exclusive new technologies have been produced since the R&D program was launched last year.

The Korea Institute of Industrial Technology (Kitech) found a way of making stronger magnesium that is 40 percent cheaper to produce than regular magnesium under current methods. Boeing has expressed interest in the product, Kitech said.