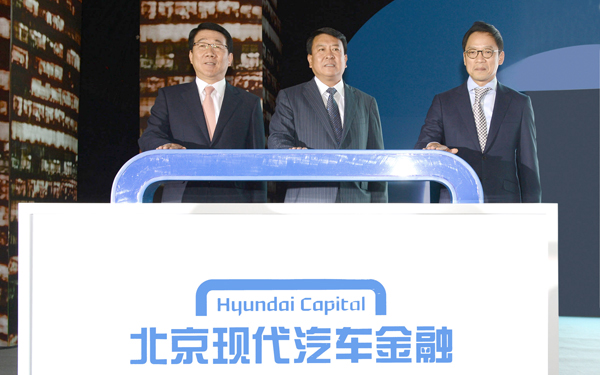 
After successful joint ventures with multinational conglomerates like GE Capital and Santander, Hyundai Capital newly inked a partnership with Beijing Automotive Industry Group (BAIC), a wholly state-owned enterprise, to tap into the inchoate market of automobile financing in China.

Hyundai Capital announced on Sept. 25 of the ambitious undertaking to provide financial services in China with the holding company, which also operates Beijing Hyundai Motor.

China is now the largest automobile market in the world selling more than nine million vehicles just in the first half of this year. Hyundai-Kia ranks third in the market share in passenger vehicle sales with 8.9 percent, following Volkswagen (18.7 percent) and General Motors (9.6 percent).

In spite of the sizeable market and current status as an automobile superpower, China only has a meager 10 percent utilizing auto-financing services.

As the purchasing power of the young and middle class is increasing, the car market is expanding at an unprecedented rate in the western and the inland areas. Hyundai Capital observes that growth potential and marketability of auto financing in the largest car consuming nation are very high.

The joint venture with BAIC is further testament to Hyundai Capital’s commitment to tap into the potential gold mine, following the establishment of its Beijing office back in September 2005 and thorough market research and preparation that ensued since.

It has received the first and second approval from the Chinese government and is on its final steps to advance into the auto-finance market in China.

Hyundai Capital China aims to fully utilize the brand value and merits of Hyundai Motor Group, which is widely known in China, as well as the already established strong sales network of both Hyundai Capital and BAIC.

In addition to the knowhows that it possesses as Korea’s largest installment finance company, Hyundai Capital will strategically tackle the Chinese market by providing services that are both prompt and diversified.

First of all, through the advanced evaluation approval system, loans that have been approved will be available within the hour after the loan is applied for and the loan will be credited to the account within three business days, providing an unprecedentedly speedy transaction. Local banks take on average 20 to 30 days for a similar transaction.

The company will advance to cities where Hyundai-Kia Motors has already entered, securing sales personnel among the top dealers and continue to expand into the market. It aims to secure 95 percent of China’s Hyundai Kia Motor dealer’s customer base by 2015.

Hyundai Capital executive notes, “With the experience gained from growing to be Korea’s largest installment finance company and localized finance products, we will be able to support Hyundai-Kia Motor’s growth more effectively.”

BAIC staff adds, “Beijing Automotive Industry Group is a company investing in and lending for development of Beijing’s automobile industry and with a deep understanding and experience in the Chinese market we will provide strong support so Hyundai Capital China can grow to flourish in the Chinese market.”

Hyundai Capital is already providing finance services in the United States and United Kingdom and is operating a separate entity in Europe and Russia. In addition, it has also set up offices in Brazil, Australia and India and is working toward transforming these offices into auto-finance corporate bodies, treading its way up to be a global financial company.

The Beijing Automotive Industry Group was founded in 2002 and was set up under Beijing government’s policy to promote modern manufacturing industry.

BAIC has a high stake in Beijing Hyundai Motor. Beijing Hyundai Motor is the first joint venture of China and a foreign country since China joined the World Trade Organization and its focal industry specializes in cars, engines and automobile parts manufacturing and sales.