[INTERVIEW] Cultural Revolution : Coming to grips with a checkered legacy

[INTERVIEW] Cultural Revolution : Coming to grips with a checkered legacy 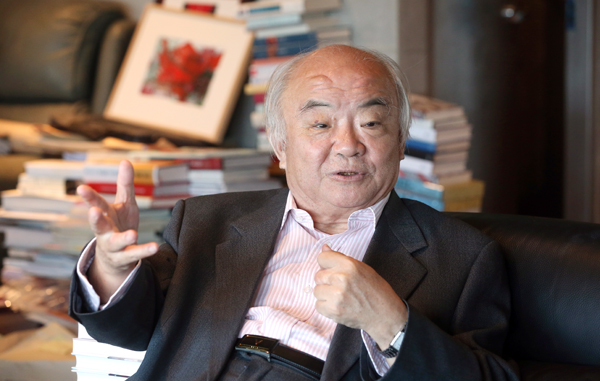 
Qian Liqun, a former Peking University professor who has gained a significant following as the author of “The Mao Zedong Era and Post Mao Zedong Era (1949~2009): An Alternative Writing of History,” was one of the winners at the Paju Book Awards. This formed a part of the Paju Book Sori Festival, an eight-day event that ended Sunday.

In an interview with the JoongAng Ilbo on Sept. 18, Qian warned that, “Chinese society now stands on the brink of a crisis.”

“There’s a sense of urgency surrounding China that we cannot continue to live like this anymore, and this atmosphere pretty much resembles the post-Cultural Revolution [1966-1976] period,” said the 73-year-old author.

Born in 1939 in Chongqing in southwest China, Qian started his college life studying Chinese literature at Peking University in 1956. But as the school’s literature department was merged with Renmin University due to educational reforms imposed by the Chinese government, he ended up graduating from the latter.

Qian is considered an expert in the works of Lu Xun, the pen name of Zhou Shuren, a Chinese intellectual and writer who was sharply critical of the Cultural Revolution.

Although Qian was forced to quit his professorship at Peking University for publicly criticizing China’s education system 10 years ago, he is still regarded as a spiritual mentor at the school.

Qian, who emphasized the spirit of independence, freedom, criticism and creativity to his students, ranked first among the school’s 10 most excellent professors in a student vote held to commemorate Peking University’s 100th anniversary in 1998.


Q. Congratulations on winning the award in Paju. Why do you think the judges chose you?

A. I think I benefited from the world’s growing interest in China. They want to know more about history and the reality of China, and I think they figured my books will help them to find some of the answers.

Three of your books have been translated into Korean, including “Refusal to Forget: Notes for 1957 Studies,” which is concerned with the anti-right-wing movement of the time. How do you see this in the context of history?

The movement was an important turning point for Chinese history for two reasons: First, the framework of modern China was structured after this; second, protests by Chinese civilians began from 1957.

Did it trouble you that the book has not been published in mainland China?

Many of my books never got published in China as they failed to win approval from the Chinese authorities. Even those books that were printed had some of their contents deleted. Roughly 60,000 words were removed from my book, “My Mental-spiritual Autobiography.” I put back the deleted parts in bold letters in the Korean version so readers here could see exactly which parts the Chinese censors took out.

What kind of books get rejected in China?

There are four off-limit zones: The anti-rightist movement in 1957, the great famine at the end of 1950s and the early 1960s, the Cultural Revolution, and the 1989 Tiananmen Square protests.


When do you think China will be able to face up to such issues?

I don’t know at this point. But one thing I’m paying attention to is the growing prominence of the Internet. Chinese authorities try to control the Internet, but that’s not easy. My writings and paragraphs that were cut out by censors are accessible on the Web. Chinese publishers are controlled by the Communist Party. To broaden the freedom of press in China, we need a privately managed publishing firm that’s not under the control of the Communist Party.

What is the legacy of the Cultural Revolution?

The results can be seen everywhere. It affected politics, society and the economy. This effect was passed on to subsequent generations. It greatly affected people’s ideology.

Chinese culture was often regarded as Confucian and Taoist, but the Cultural Revolution gave birth to “Mao Zedong Thought,” which also governed people’s ideology and behavior.

What exactly is “Mao Zedong Thought?”

Mao was China’s biggest idealist and dictator. His ideology encompasses both idealism and despotism. This often creates conflicts, or dualism. For example, if you aren’t an enemy, you’re a friend; if something is inaccurate, then it’s a mistake. The best way to resolve the contradictions inherent in dualism is by protesting.

But that makes people become truculent. Mao considered himself the guardian of truth, and people who thought differently from him were branded as enemies. This tendency can still be seen in modern China. Even those who criticize Mao bear traces of his thinking.

Some say the scars from the Cultural Revolution enabled Deng Xiaoping to pursue reforms and open China up to the outside world. So in China, is crisis necessary for reform?

Not really. Chinese society now stands on the brink of a crisis. How deep do the contradictions need to become? This atmosphere pretty much resembles the post-Cultural Revolution period.

There are two distinguishing characteristics we can see after the Cultural Revolution. First, there’s a sense of urgency surrounding China that we cannot continue live like this anymore … second, even though Mao’s control was rigid, people were still free to think. They actively discussed what they could do in this situation. Now China is again facing a similar situation.

Anti-Japanese protests are becoming more fervent in China due to the territorial dispute over the Diaoyu Islands, (called Senkaku in Japanese). Some say these are being stoked by the Chinese government; others fear a revival of Sinocentrism.

Historically, the Diaoyu Islands belonged to China. But we have to be wary of Chinese nationalism developing along irrational lines as these territorial disputes build. I don’t know whether the Chinese government is masterminding the protests.

China still has a lot of problems, and it must be cautious about stoking Sinocentrism. Peaceful coexistence among neighboring counties should be the ideal.