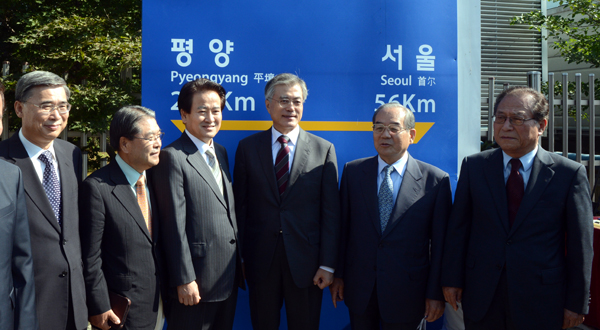 
Unification was the keyword for the campaign of Moon Jae-in, the presidential candidate of the largest opposition party, yesterday as he visited a train station near the inter-Korean border with North Korea policy officials of previous liberal administrations.

Moon, the presidential candidate of the Democratic United Party, visited Dorasan Station, South Korea’s northernmost station on the severed Gyeongui railroad, which once linked Seoul and the North’s Shinuiju.

In the symbolic trip, Moon appeared to be promising a return to the “sunshine,” or engagement policy toward the North, started by the Kim government and continued by Roh, in an appeal to liberal voters.

Moon also paid a visit to the widow of the late President Kim, Lee Hee-ho, on Monday to appeal to voters in Jeolla, the traditional stronghold of Kim.

“Dorasan Station is the symbol of the developments in inter-Korean relations during the decade of the Kim and Roh presidencies,” Moon said yesterday. “At the same time, it symbolizes the broken relationship between the two Koreas under the Lee Myung-bak administration.”

Stressing that his North Korea policy starts from the viewpoint that “peace equals economy,” Moon said he pledged to establish an inter-Korean economic coalition by developing the economic cooperation plans declared after the summits between the two Koreas in 2000 and 2007.

“I will open the era of ‘30-80’ by increasing South Korea’s national per capita income to $30,000 and the population of the Korean Peninsula to 80 million,” Moon said. “I will also create a Northeast Asian economic community by linking the Korean peninsula with the economy of the continent.”

Moon also introduced his North Korea policy team and said Chung, the former unification minister for the Roh government, will head the group. He said he and the team want to visit the Kaesong Industrial Complex in the North and urged the two Koreas to allow the trip.

“The Kaesong Industrial Complex is the hope of South Korean small firms,” Moon said. “It is also a test bed of the unified economy.”

The collaborative economic project between the two Koreas is located about 10 kilometers (six miles) north of the inter-Korean border. The groundbreaking ceremony took place in 2003 for the industrial park, and factories opened in December 2004.

“The Kaesong Industrial Complex played an important role in stopping the decisive breakdown of inter-Korean relations after the Lee administration began,” Moon said. “Expanding the project as initially planned to 20 million pyeong [6611.6 hectares] is the beginning of the inter-Korean economic coalition.”

Moon also promised efforts to aggressively push forward his policy. “I think it will pick up speed very quickly when we start from where it was stalled,” he said.

“My dream is making a unified Korean Peninsula where the two Koreas prosper together and freely exchange,” he said. “If I become president, I will prepare for unification by establishing an inter-Korean economic coalition during my term.”

He also promised to guarantee reunions of separated families.

Moon was trying to differentiate himself from his rival Ahn Cheol-soo by showing off his North Korean policy team. “Moon has a comparative advantage over Ahn in terms of inter-Korean issues,” said a Moon associate.