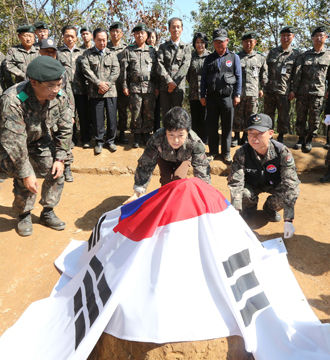 Park Geun-hye, foreground left, the presidential candidate of the ruling Saenuri Party, covers the remains of a soldier with the Korean flag yesterday at an excavation site in Yanggu County, Gangwon. [NEWSIS]

Park Geun-hye, presidential candidate of the ruling Saenuri Pary, paid a visit yesterday to an excavation site in Yanggu County in Gangwon where remains of fallen soldiers from the 1950-53 Korean War are being recovered.

The visit was Park’s first trip to a military unit in two months.

Wearing a military uniform, the 60-year-old presidential candidate received a briefing from a recovery team on the progress in excavating the remains and paid her respects to the fallen.

Park laid a bundle of white chrysanthemum in front of the remains of a fallen soldier and raised her hand in salute. Then she covered the remains with the Korean flag.

“We must not forget the sacrifices of many that made it possible for Korea to become what it is today,” said the candidate, whose approval rating has faltered in recent polls.

“National security is like air that we breathe. We don’t come to appreciate it unless we run out of it,” Park added.

The visit, which was made one week ahead of the Armed Forces Day on Oct. 1, was intended to highlight Park’s conservative views on national security and give her higher ground on the issue than rivals Ahn Cheol-soo, an independent, and Moon Jae-in of the Democratic United Party.

After the visit, Park met with popular novelist Lee Oi-soo yesterday, whose strong voice on social networking services such as Twitter could sway a lot of young voters in the December presidential election.

Lee has over 1.5 million followers of his Twitter account. Considered a liberal figure, Lee served as a member of the mentor group for Seoul Mayor Park Won-soon during the mayoral bi-election last year and worked for Chung Dong-young, the 2007 presidential candidate of the main opposition party, in the general election last April.

Park and Lee had a private meeting for about 30 minutes around 3:00 p.m. yesterday in Lee’s house in Hwacheon County, Gangwon.

“It must not have been easy for her to issue a public apology for her father’s dictatorial rule, so I give her my applause,” said the 66-year-old novelist.

“I think Park’s visit today is a hallmark of national reconciliation,” he continued. “She asked for my help in finding ways to make people in the country happier, I will give her my hand wherever she needs me.”

The meeting sparked speculation that Park was trying to recruit the popular writer onto her campaign, but a campaign aide refuted such claims.

Park, meanwhile, said she disagreed with a government plan to scrap the free day care program that was championed by both the ruling and opposition parties in the general election five months ago. All toddlers under 24 months, regardless of their parents’ income levels, were given free day care under the program.

Faced with growing budget restraints, the Ministry of Health and Welfare announced Monday a new program that will exclude households in the top 30 percent income bracket from the free day care.

“Those in the top 30 percent income basket are also young couples with difficulties raising children,” Park was quoted as saying by Cho Yoon-sun, the Saenuri Party spokeswoman. “The Saenuri will make sure to keep the promise made to them in the National Assembly.”