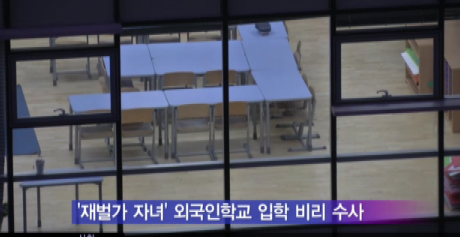 A number of high-profile figures, including family members of major conglomerates and a lawmaker, are under investigation for forging passports and citizenship documents to get their children into international schools.

The Incheon District Prosecutors’ Office said yesterday it has questioned some of the prominent family members and will expand its investigation to around 50 other members of well-known clans.

Earlier this month, the prosecutors indicted three brokers on charges of providing fake passports and naturalization papers from South American and African nations to families trying to enroll their children at expensive international schools since June 2010. The brokers, heads of an overseas studying consulting firm and immigration agencies, allegedly received from 50 million to 100 million won ($44,650 to $89,300) for each fraudulent case.

To be enrolled at international schools, a student has to be non-Korean, or to have at least one foreign parent. Korean students who have spent over three years living abroad are also eligible.

Prominent people under investigation include the wife of a nephew of Prime Minister Kim Hwang-sik surnamed Park. She was questioned by prosecutors Monday on suspicions of paying a broker at least 50 million won to procure a fake Guatemalan passport in order to send her child to an international school in Mapo District, central Seoul.

Investigators said Prime Minister Kim is not under any suspicion.

Prime Minister Kim’s nephew is the second son of Huh Chin-kyu, founder of the Iljin Group, who is married to Kim’s sister. His wife, Park, is also from a well-known family in Korea. She is the third daughter of late former Kumho Group Chairman, Park Jeong-koo, who was the second son of the group’s founder. Prosecutors also have summoned Park’s older sister on the same charge for questioning. So far, investigators have summoned around 10 parents from wealthy and widely known families.

The prosecutors are extending its questioning to around 50 parents. The daughter of a six-term National Assembly lawmaker and a relative of a former Doosan Group Chairman are reportedly among them.