In victory lap in Gangnam, Psy says he’s in a ‘dream’

In victory lap in Gangnam, Psy says he’s in a ‘dream’ 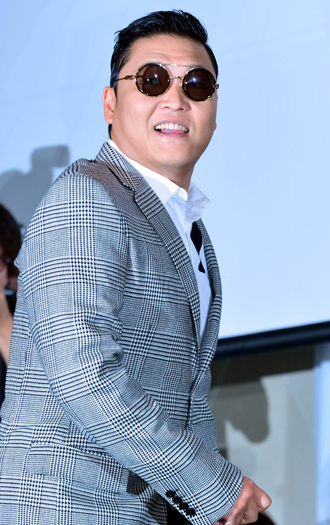 Psy walks into a press conference in southern Seoul yesterday.[NEWSIS]

Korea’s latest “world star” came home yesterday after a whirlwind of publicity and celebrity engagements in the United States.

Psy, the 34-year-old rapper who hit some kind of global nerve with his song “Gangnam Style” and the giddyap dance that accompanies it, wound up a three-week tour of the U.S. in which he was featured on “Saturday Night Live,” the “Today” show and “The Ellen DeGeneres Show.” He picked up an agent in the U.S. too: Scooter Braun, manager of Justin Bieber and Usher.

He immediately held a press conference at a hotel in Gangnam - where else? - dressed in a snazzy suit that was either Gangnam style or Jill Stuart New York, LG Fashion’s contemporary men’s wear line, or both. (Psy signed on as a Jill Stuart brand ambassador on Monday.)

The video for “Gangnam Style” broke a Guinness World Record Monday for the “most liked” video on YouTube, registering more than 2.45 million “likes” as of yesterday.

“I don’t think the title ‘world star’ goes well with me,” he said at the press conference, which was attended by hundreds of reporters from both local and foreign media. “It’s too burdensome. How about just calling me an international singer?”

“I really don’t know why ‘Gangnam Style’ gained so much popularity abroad,” said Psy, which is short for Psycho. (His real name is Park Jae-sang.) “It’s sung in Korean, and I guess foreigners don’t even understand the lyrics. But I think they like it because it’s funny. They say I resemble Austin Powers.”

But he’s concerned that “Gangnam Style” may be giving the wrong message about Korea to the rest of the world and doesn’t want to be known as merely a “funny, weird Asian artist.”

“I want Americans or other foreigners to see me not just as a strange singer from Korea who does the crazy horse-riding dance,” he said. “I hope they realize by looking at my concerts that Korean artists are fantastic performers - not those artists who sing to the music for one or two hours, but those who can ecstatically carry on a concert for more than four hours with just a microphone in their hands.”

Critics assume that Psy wrote his “Gangnam Style” to satirize the rampant consumerism of wealthy Koreans, which the artist sort of denies.

“Honestly, it was July in Korea, and the weather was so hot,” he said. “And I was already an artist for 12 years. I thought it was my duty to play with music and create something fun. So everything I tried with ‘Gangnam Style’ was for fun. That was all.”

When he was asked about the rumor that he may give a solo concert at Madison Square Garden in Manhattan, the artist chuckled and said that was just talk that came up at a Korean club in New York while he was with his new manager, Braun.

“I took them to a Korean club, and Braun told me to tell people that I’d perform at Madison Square Garden and that he’ll be responsible for it, but the next day, he couldn’t remember,” said Psy.

Psy - who was obviously overwhelmed by the number of people at the press conference and the number of reporters who showed up at the airport to greet his predawn flight from the U.S. - cautiously said he hopes to reach No. 1 on Billboard’s Hot 100 Chart in the near future.

“If I do,” said Psy, “I’ll dance the horse-galloping dance in front of City Hall topless.”

Yesterday, representatives from the music industry estimated that at a bare minimum, Psy has made around 20 billion won ($17.9 million) abroad from that single song.

But the artist said he is not yet “rolling in the dough.” He said he’ll know “exactly how much he’s worth” by the end of next month.

“I’m sorry to disappoint you as many people are interested in my financial condition. But you know, I’m even more curious,” he said.

Psy ended the press conference by galloping out of the hall.