Perry is Billboard’s Woman of the Year

Perry is Billboard’s Woman of the Year 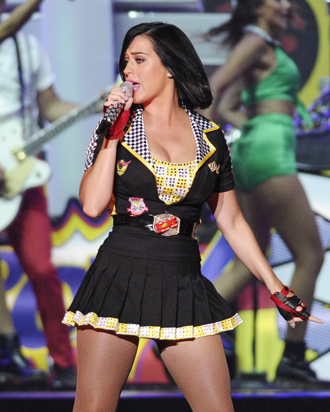 LOS ANGELES - Pop star Katy Perry was named Billboard’s Woman of the Year on Tuesday, after a whirlwind 12 months in which she split up with her husband and turned their break-up into a hit single and film.

Perry, 27, channeled her split with British comedian Russell Brand in late 2011 into the chart-topping hit “Part Of Me” and a 3-D behind-the-scenes film “Katy Perry: Part Of Me” that documented her personal and professional ups and downs.

The singer has won over a legion of fans, known as ‘katycats,’ on Twitter and Facebook with her quirky costumes and catchy bubble gum pop songs.

Forbes placed Perry at No. 3 on their highest-earning female musicians list in December 2011, estimating her pretax earnings at $44 million.

She has sold 48 million tracks in the United States alone, according to Billboard, including the hits “Firework,” “California Gurls,” “E.T.” and “Hot N Cold” from her major-label 2008 debut “One Of The Boys” and 2010 album “Teenage Dream.”

Perry has become a branding machine, lending her name to her own fragrance, nail polish and false eyelash lines. She is also the face of skin care line Proactiv and Popchips snacks.

Billboard’s editorial director Bill Werde said in a statement that Perry was chosen for her achievements, calling her “one of the most exciting and inspiring artists in the industry.”

“Katy Perry broke into the industry not even five years ago, and has already accomplished more than most artists can hope for in an entire career,” Werde said.