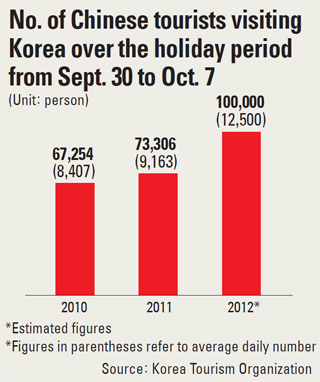 China’s territorial dispute over the Diaoyu Islands, known in Japan as the Senkaku, is proving a boon for the Korean economy as escalating anti-Japan sentiment has led many Chinese tourists to cancel their travel plans and buy flights and package tours to Korea instead over the upcoming holiday.

China’s annual Mid-Autumn Festival falls on Sunday and is followed by a seven-day break to celebrate National Day on Monday.

The Korea Tourism Organization (KTO) expects a record 100,000 Chinese tourists will visit the country during this period, marking an increase of 35 percent from last year.

Given that Chinese tourists spend $1,948 per person on average during their trips to Korea, the agency estimated the holiday will generate an economic effect worth 200 billion won ($178 million) in tourism revenue.

China’s state-run tourism organization has been encouraging travel agencies to scale back their operations in Japan by canceling large-scale trips there, according to reports.

“One Chinese travel agency was planning to send 50,000 tourists to Japan to celebrate the 40th anniversary of bilateral diplomatic ties but has now canceled the trip,” said an official at the KTO’s Beijing bureau. “Major travel agencies in the country have also stopped promoting trips to Japan and are offering to fully refund customers who have already booked trips.”

Many Japanese industries have already been dealt a blow by the response to the Japanese government’s decision to purchase the disputed islands on Sept. 10.

Japan Airlines said last week that 5,250 Chinese visitors who were scheduled to visit Japan between September and November have canceled their trips. All Nippon Airways reported 15,000 similar cases.

While Tokyo expects the number of Chinese visitors to decline by as much as 20 percent, analysts at brokerage firms here say Korea’s tourism, retail, plastic surgery and airline industries will be the biggest gainers as Chinese head here instead.

“Korea and Japan have been competing to secure the upper hand in terms of attracting Chinese tourists,” said Han Young-ho, an analyst at Shinyoung Securities. “As more Chinese are coming to Korea for holidays, Hana Tour, Mode Tour, Hotel Shilla and local casino firms including Paradise and GKL will greatly benefit in the third quarter. Chinese tourists are likely to choose Korea over Japan when planning their trips in the future.”

Asiana Airlines said 91.3 percent of its Korea-bound flights from China are already booked for the upcoming holiday, up 12.4 percentage points from last year.

Korean Air said the booking rate for its Korea-bound flights from China now stands at 98 percent over the same period, roughly unchanged from 2011.

The Hyatt Regency on Jeju has stopped accepting reservations for the first week of October as it is now full, it said.

Retailers including Lotte Department Store and Shinsegae Department Store are gearing up to welcome Chinese travelers. The former is set to launch a huge sale from Friday to Oct. 7 with discounts of up to 20 percent on 75 brands that are popular among Chinese. Shinsegae said it will slash up to 30 percent off its prices for Chinese passport holders.

Most plastic surgery clinics in southern Seoul are fully booked. Most of their clients are Koreans who want to improve their appearance over Chuseok and still have time to heal, but the hospitals say they are also seeing more reservations from Chinese who want to look like Korean celebrities.

“Our surgeons are fully booked over the holiday,” said an employee at a plastic surgery hospital in Sinsa-dong, southern Seoul. “Chinese patients already make up 80 percent of the foreign patients at our clinic. We have beefed up the number of Chinese-speaking staff as we believe more Chinese want to come here for nips and tucks rather than go to Japan.”

Market observers caution that the domestic tourism industry could suffer if the territorial dispute over Ieodo, a group of reefs claimed by both Korea and China, intensifies.

Located near Korea’s southernmost Mara Island, Ieodo is effectively controlled by the Korean government, which has a research station there. However, China also lays claim to the island.