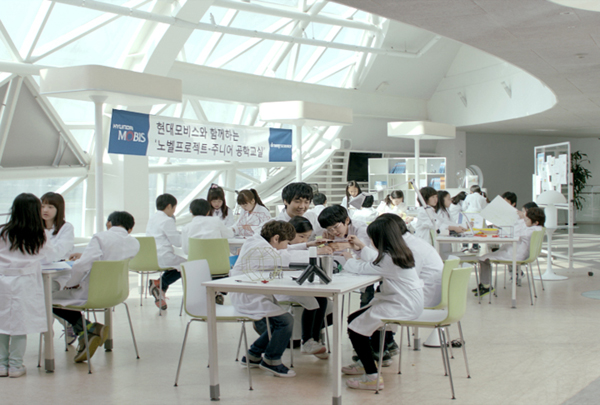 In this screen capture from a TV commercial, Hyundai Mobis shows its researchers teaching children at a science class run by the company.


Industrial companies and wholesalers, which are less familiar to consumers than finished goods producers, are ramping up their public relations to build up their brands.

Most B2B companies, as they are increasingly known, are in heavy industries like steel, chemicals, plastics and some energy fields.

Korean steelmakers, chemicals manufacturers and energy firms used to prefer obscurity to recognition, or at the very least, didn’t think it mattered to their success. But that attitude has changed as they start marketing themselves on television, in newspapers and on outdoor billboards.

The reason for the trend is that the companies have woken up to the value of their brands. 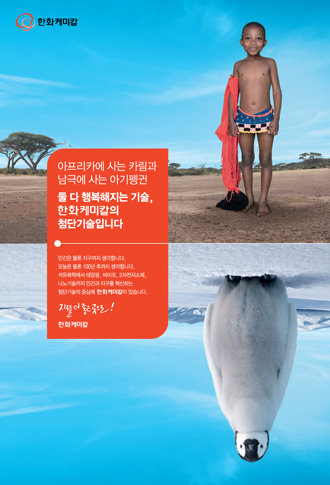 Hanwha Chemical uses an African boy and an Arctic penguin in its first public advertisement.

Hanwha Chemical is starting to attract attention by riders of public buses because of an effective advertisement at bus stops. It shows a young African boy and a penguin standing upside down in a background that looks like the Arctic. The boy and penguin symbolize the world’s hottest and coldest places, which are most affected by climate change.

It is the first advertisement for the general public run by the 60-year-old company. Hanwha wants to promote its environmental friendliness.

“We have never run advertisements because the company paid no attention to brand value,” said Kwon Hyeok-beom, a manager at the company’s communications department. “The first advertisement has proven to be a success, raising public recognition of the company remarkably.”

Kwon said one of the most direct effects was that the number of applicants for entry-level positions in the company surged significantly. Previously, college kids had never heard of Hanwha Chemical.

The improved image has improved ties with contractors and also raised the stock price, he said.

SK Innovation, the country’s largest oil refiner, also produces high value-added petrochemical products to sell abroad. Its current television ad is the talk of the town because four different cartoon characters explain SK Innovation’s key businesses in a jolly and easy way. Viewers have liked the cartoon commercial, saying it is fresh to see an industrial company reach out to consumers. 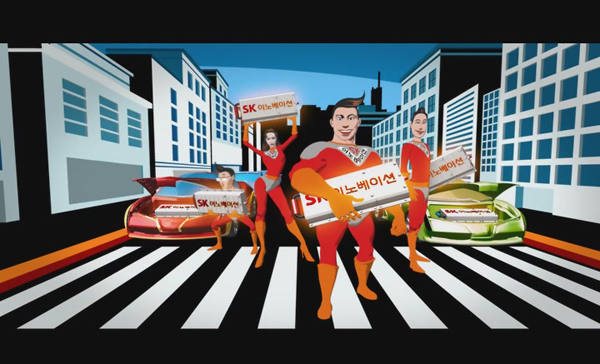 SK Innovation employs cartoon characters to provide easy explanations about its businesses. Provided by the companies


“The commercial explains well about what kind of company SK Innovation is,” wrote a netizen on a local Internet bulletin board.

“A commercial about a business shouldn’t be rigid in terms of communication with consumers,” he said, “and our latest approach has worked well.”

Hyundai Mobis, an automobile parts supplier for Hyundai Motor Group, has the most ambitious television ad. The company is launching a campaign saying that science education, which is losing popularity, is crucial to the future of the nation.

“Our company has kept a very low profile because we are just a parts supplier to Hyundai Motor,” said Yang Nan-soo, a company employee. “The recent ad has helped increase public awareness of the company, creating an image that we fulfill our corporate social responsibility.”

Industrial companies used to only care about the quality of products they supply to their clients, according to Yang. That is changing.

Doosan Heavy Industries & Construction has successfully changed its image by running nine television commercials that emphasize the value of people.

“Our conservative, stern image has been really softened by the commercials,” a company employee said. “We hear from applicants for jobs that Doosan is a company with a warm and caring corporate culture, which is the power of an advertisement.”