At UN, Korea and China say ‘real’ history is at stake

At UN, Korea and China say ‘real’ history is at stake 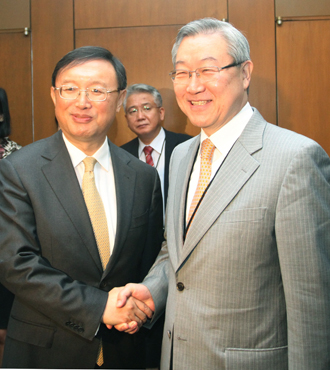 At a time of parallel face-offs with Japan over territorial claims, Korea’s Foreign Minister Kim Sung-hwan met with his Chinese counterpart Yang Jiechi on the sidelines of the United Nations General Assembly in New York Monday and agreed on the need to give the world a proper understanding of regional history.

“They [issues surrounding territory] are about history and we shared a common view that we should give the world a truthful understanding of history,” Kim told reporters after his talks with Yang.

The Korea-China foreign ministerial talks came amid growing tension in Northeast Asia over territory and history issues. Japan is in a territorial dispute with China over the Senkaku Islands, referred to as Diaoyu by the Chinese, while it is also in conflict with Korea over the Dokdo islets.

It was expected that the three countries would touch upon the issues at the UN General Assembly. 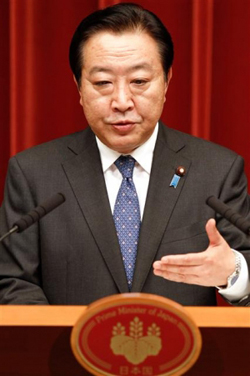 So far, Japan has been the most aggressive among the three countries in raising its disputed claims.

Before leaving Tokyo for the UN, Japanese Prime Minister Yoshihiko Noda gave an interview with The Wall Street Journal denying any intention to apologize or give compensation to Korean women forced to be sex slaves for the Japanese military during World War II.

Noda said those issues were all put to rest with the treaty that normalized relations between the two countries in 1965.

Seoul’s Ministry of Foreign Affairs and Trade immediately refuted his response, saying that Japan hasn’t yet “provided any compensation based on a legal responsibility.”

Noda will give a speech today at the UN General Assembly in which according to reports he will urge countries involved in territorial disputes with Japan to resolve them by bringing the issues to the International Court of Justice. Early this week, Noda told reporters he would like to “urge for a resolution of territorial disputes based on law and regulations.”

China’s representative is expected to speak to the General Assembly tomorrow. Kim will address it on Friday.

“The issues our minister will bring up will vary depending on what Noda says,” said an official from the Foreign Ministry in Seoul.

Meanwhile, concerns mounted in Seoul over its own dispute with Beijing over Ieodo, a group of underwater reefs located 92 miles southwest of Korea’s southernmost Mara Island. Ieodo is effectively controlled by Korea.

The island lies in an overlapping part of the two countries’ respective exclusive economic zones (EEZs).

There were Chinese media reports yesterday that China plans to use unmanned aircraft by 2015 to conduct marine surveillance of Ieodo, which could lead them to claim jurisdictional rights to the island.

As part of efforts to strengthen its jurisdictional control over the islet, Korea built an unmanned maritime research station on it in 2003 to monitor weather conditions.

“We are verifying media reports,” said Cho Tai-young, a spokesman for Seoul’s Foreign Ministry. “Korea will do everything possible to ensure its jurisdictional control of Ieodo within its EEZ.”