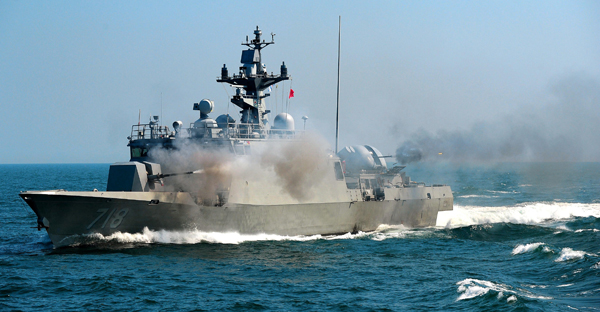 Amid tension at the Northern Limit Line, the Navy’s Second Fleet conducts a live-fire exercise yesterday in waters near Deokjeok Island in the Yellow Sea. [NEWSIS]


After a series of intrusions by North Korean vessels across a tense maritime border, Seoul announced stepped-up security measures against any “strategic provocation” ahead of the presidential election in December.

President Lee Myung-bak called an emergency ministerial-level meeting yesterday and demanded Pyongyang stop any provocations, which he sees as an obvious attempt to intervene in South Korean politics during election season.

“The government urges Pyongyang to immediately suspend any attempts to interfere with our presidential election,” the Blue House said in a statement issued yesterday. “President Lee advised ministers to keep a strong national defense at the time of the presidential election.

“Our military has reaffirmed the principle of remaining thoroughly vigilant against any strategic, planned provocations from North Korea ahead of the election and strongly retaliating against any provocations,” the statement added.

The government also warned the North not to intervene in the election through social networking services, according to the Blue House.

Along with the recent violation of the Northern Limit Line (NLL) by North Korean fishing boats, the ministers also discussed China’s decision to remove all of its vessels near the inter-Korean sea border.

Beijing did so after a meeting between China’s foreign minister and South Korea’s on Monday so they wouldn’t confuse the South Korean Navy at a tense time.

On the subject of North Korea’s parliamentary session Tuesday, the ministers said they were disappointed that there were no measures to address the chronic food crisis in the impoverished regime.

The unusual parliamentary session was expected to discuss economic reforms, but statements from the North Korean state-controlled media mentioned no such discussions.

Another North Korean fishing boat violated the western sea border on Tuesday night, a military official said yesterday, the seventh violation of the NLL by vessels from the North since Sept. 12.

In Tuesday’s intrusion, the North Korean boat crossed about 700 meters (0.43 mile) into South Korean waters around 9:38 p.m. but retreated immediately after a South Korean patrol vessel issued a radio warning.

South Korean military officials say that it is rare for a North Korean fishing boat to cross the border at night. They are focusing on the possibility that North Korean soldiers could be on those boats.

“There were North Korean soldiers in some fishing boats working near the sea border,” a South Korean military official told Yonhap News Agency. “We assume that they violated the line with a deliberate purpose.”

Pyongyang has been alert to South Korean elections in the past.

Before the legislative election last April, North Korea issued a flurry of statements condemning the current administration and urging young voters to cast their ballots.

Just two months before local elections in June 2010, a South Korean naval ship, the Cheonan, was destroyed by a North Korean torpedo and 46 seamen were killed. In the elections, the opposition Democratic Party performed very well.

“A series of recent reports by North Korean state media, such as the ruling Workers’ Party’s Rodong Sinmun, have been intensifying their hawkish tone against South Korean conservatives every day, expressing their will to intervene in our election,” Kim Yeon-su, a professor at Korea National Defense University, told the Korea JoongAng Daily. “With such frosty relations with both South Korea and the United States, I think they’re trying to create any circumstance advantageous for them.”

“When North Korea triggers any provocation, it usually means their internal situation is chaotic and complicated,” said Yun Duk-min, a professor at the state-run Institute for Foreign Affairs and National Security. “When they sank the Cheonan, the regime was reeling from the failure of its currency reform. Many sources say that there’s a power struggle between the party and the military. I think they must be struggling with their internal problems at this moment.”