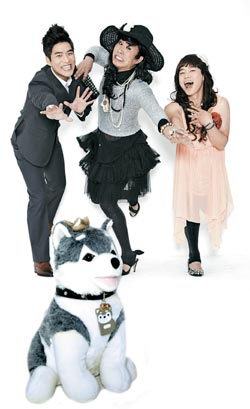 He may be a creature of few words, but he certainly has the prerequisites for stardom. The stuffed dog has been featured in a “Brownie” music video and swept up in scandalous Internet rumors when photographed lying next to a real live female canine.

Mrs. Jeong (comedian Jeong Tae-ho in drag) is a wealthy, middle-aged buffoon. With Brownie on his leash, she visits a home appliance store to return a used rice-cooker because it gets hot. When the sales clerk refuses to refund her money, Mrs. Jeong barks, “Brownie, bite!” 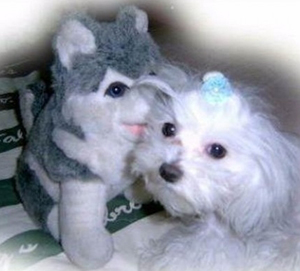 When Brownie doesn’t respond, Mrs. Jeong looks embarrassed, then quickly says, “Oh, he gets sentimental in the fall.” The audience bursts into laughter.

The “Mrs. Jeong” segment is staged by Jeong, Brownie, Song Byeong-cheol, who plays the shopkeeper, and Kim Dae-sung, the daughter. It recorded a viewer rating of 29.1 percent on Sunday, the highest of the 14 regular “Gag Concert” segments.

Without making a sound, Brownie has arguably become the star of “Mrs. Jeong.” According to “Gag Concert,” it’s unprecedented for an inanimate object to steal the spotlight.

But Jeong, who plays Mrs. Jeong, is the one who is most stunned by Brownie’s tremendous popularity.

“To be honest, I wanted a better looking stuffed animal than Brownie. I just found him covered in dust inside the prop room,” said Jeong. “I am so shocked by the love he receives now.”

For a public that was understandably shocked when it was revealed that Sang Geun gets tens of millions of won for one TV ad, the Brownie phenomenon seems utterly beyond comprehension.

Jung Deok-hyun, a pop culture critic, analyzed Brownie’s popularity as a “result of people’s endless desire to look for an object of amusement or recreation.”

“That being a lifeless creature who passively responds to any demand escalates that amusement,” said Jung. “Playing with Brownie can be infinitely expanded, unlike audiences just having fun by mimicking comedians or copying their fad words.”

Netizens are constantly uploading pictures of Brownie look-alikes, lying beside a female dog - “Brownie has a girlfriend” - or inside a luxury car - “Brownie is rolling in dough.”

Typing “Brownie” in a search engine yields endless lists of Brownie’s fan cafes, pictures and even look-alike stuffed dogs for sale. Brownie has been receiving fan letters, invitations to fellow comedians’ weddings and offers to do TV commercials.

“Brownie, the reason why I like you is arf, arf, arf,” wrote one fan.

Even though the other cast members of the segment have received no requests to appear in TV ads, Brownie has two or three requests already and was even asked to do a solo interview.

Moreover, Brownie was featured on a single released this week and appeared in the music video. The song titled “Brownie” begins with barks. “Everyone will fall into love with me, I am going to bite,” say the lyrics.

Kim Nam-hyeong, a representative of Kihoejui, the entertainment agency that released the song, said “I just thought it would be fun to make a song about Brownie, so I decided to release the song for a female artist who is preparing to debut through my agency.”

While Brownie’s widespread popularity is gaining cheers from fans, the flip side is that it is also creating a backlash.

“I think it’s just too much,” said one netizen in an anti-Brownie Internet cafe. “It’s cute, and the segment of ‘Gag Concert’ is funny. But a solo interview and a music video appearance? This is a joke.”

Regardless, Brownie is undeniably more than just another pretty snout. According to one online retailer of Brownie stuffed animals, “sales doubled from last month.”