Park Hyo-shin gets not just one, but two military awards

Park Hyo-shin gets not just one, but two military awards 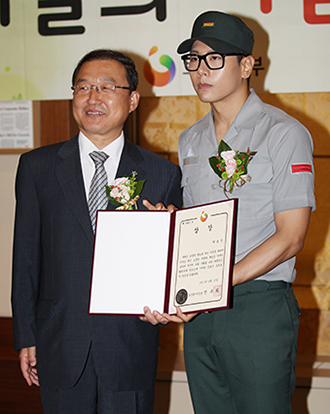 On an episode of “Night of TV Entertainment,” singer Park Hyo-shin revealed that he became the first soldier in the last six years to be given the Army Chief of Staff’s award and the Minister of National Defense Award.

Park said that he was presented with the two certificates doing what he does best: entertaining.

The celebrity soldier who was discharged just days ago said that in order to land the awards he sang his hit song “Snow Flower” for his superiors and even took to making up dance moves to his song “Passing Over Me.”
The choreography became a hit within the barracks and in all, Park spent 22-months amusing and boasting the morale of his fellow soldiers.

Meanwhile, Park’s first performance after being released will be at the “In October” concert on Oct. 14.
By Carla Sunwoo [carlasunwoo@joongna.co.kr]