WASHINGTON - The United States government has formally notified Congress of a plan to seek the sale of 36 advanced attack helicopters to Korea. 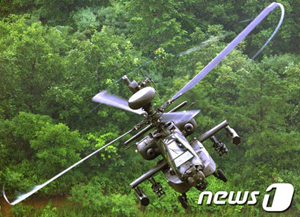 A deal under the Foreign Military Sales program, if sealed, would be worth up to $3.6 billion.

Korea is in the process of selecting a preferred bidder for 36 attack helicopters.

The two U.S. firms are in a competition that also reportedly involves the Turkish Aerospace Industry T-129B.

Seoul is scheduled to choose the winner as early as in November, defense sources said.

The agency said an estimated price for 36 Apache choppers is $3.6 billion and it includes fuselages, associated equipment, parts, training and logistical support.

It put an estimated price for 36 Cobra helicopters at $2.6 billion.

Officials from the companies, however, stressed the estimated prices are not fixed.

“The price in the notification to Congress is a maximum one in a sense, since it covers almost all equipment and services. It can go down in accordance with actual negotiations on the terms of sales,” a Boeing official told Yonhap News Agency.

Meanwhile, the agency emphasized a need to strengthen cooperation in arms sales.