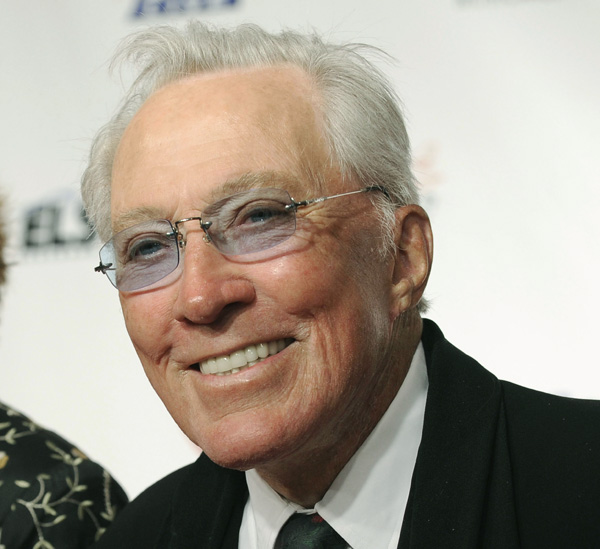 ST. LOUIS - With a string of gold albums and the signature “Moon River,’’ Andy Williams was a smooth voice of the 1960s in America.

“The old cliche says that if you can remember the 1960s, you weren’t there,’’ the singer once recalled. “Well, I was there all right, but my memory of them is blurred - not by any drugs I took, but by the relentless pace of the schedule I set for myself.’’

Williams’ plaintive tenor, boyish features and easy demeanor helped him outlast many of the rock stars who had displaced him, along with fellow crooners like Frank Sinatra and Perry Como. He remained on the charts into the 1970s and continued to perform in his 80s.

Last November, when Williams announced he had been diagnosed with bladder cancer, he vowed to return to performing in 2012, his 75th in show business.

Williams became a major star the same year as Elvis Presley, 1956, with the Sinatra-like swing “Canadian Sunset,’’ and for a time he was pushed into such Presley imitations as “Lips of Wine’’ and the No. 1 smash “Butterfly.’’ But he mostly stuck to what he called his “natural style.’’

In 1970, when even Sinatra had given up and (temporarily) retired, Williams was in the top 10 with the theme from “Love Story,’’ the Oscar-winning tearjerker. He had 18 gold records and three platinum, was nominated for five Grammy awards and hosted the Grammy ceremonies for several years.

Movie songs became a specialty, from “Love Story’’ and “Days of Wine and Roses’’ to “Moon River.’’ The longing Johnny Mercer-Henry Mancini ballad was his most famous song, even though he never released it as a single because his record company feared such lines as “my huckleberry friend’’ were too confusing and old-fashioned for teens. The song was first performed by Audrey Hepburn in the beloved 1961 film “Breakfast at Tiffany’s,’’ but Mancini thought “Moon River’’ ideal for Williams, who recorded it in “pretty much one take.’’

Although “Moon River’’ was covered by countless artists, Williams made the song his personal brand. In fact, he insisted on it.

“When I hear anybody else sing it, it’s all I can to do stop myself from shouting at the television screen, `No! That’s my song!’?”? Williams wrote in his 2009 memoir, titled, fittingly, “Moon River and Me.’’