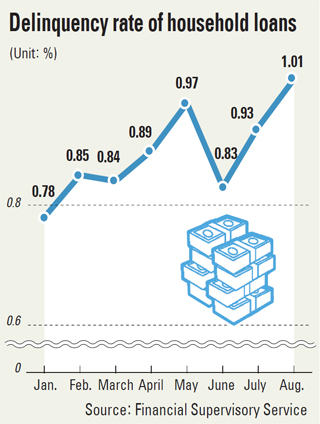 The delinquency rate for loans extended by South Korean banks rose in August from a month earlier amid protracted global uncertainties, the financial regulator said yesterday.

The loan delinquency rate for loans extended by 18 local banks stood at 1.54 percent last month, up 0.18 percentage point from the previous month, according to the Financial Supervisory Service (FSS).

The delinquency rate for loans owed by large firms surged 0.73 percentage point on-month to 2.36 percent in August, while the corresponding figure for smaller firms rose 0.09 percentage point to 1.85 percent, according to the regulator.

“Those industries are particularly hit by a global downturn, resulting in deterioration of their financial conditions,” the FSS noted.

In contrast, the delinquency rate for household loans was capped, as the government has beefed up efforts to curb the household debts that have mounted to a record 922 trillion won ($823.2 billion) as of the end of June.

Loans extended to households grew by 700 billion won in August from a month earlier, while businesses increased their loans by 1.2 trillion won over the cited period, according to the regulator.