Park gets assist as QPR loses, 3-2

Park gets assist as QPR loses, 3-2 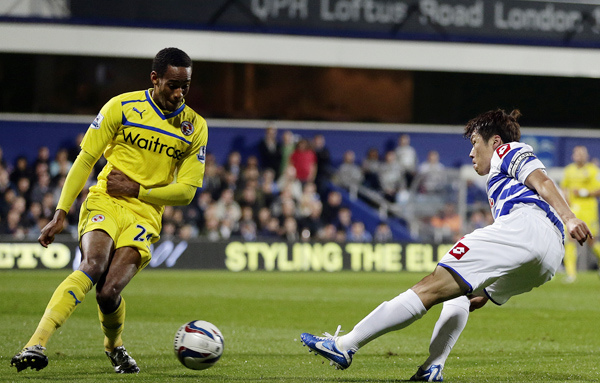 
Park Ji-sung recorded his first assist for Queens Park Rangers during a League Cup third-round match against Reading on Wednesday.

But it didn’t stop QPR from losing, 3-2, due to chronic defense loopholes that have kept the West London side winless in the first five regular matches.

In a duel between the two worst clubs in the English Premier League, the 31-year-old Korean midfielder set up the first goal for QPR after he infiltrated from the right wing in the 14th minute. Forward David Hoilett, who was charging the left-hand side inside the penalty box, converted Park’s pass into a left-footed goal. It was Park’s first significant contribution to QPR, which brought in the former Manchester United star in July.

QPR got ahead again in the 71st minute with a goal from forward Djibril Cisse before Reading capitalized on QPR’s weak back line and equalized it five minutes later on defender Nicky Shorey’s mid-range shot. Reading forward Pavel Pogrebnyak added another in the 81st minute to seal the victory. Park was replaced in the 67th minute by Bobby Zamora.

In other League Cup matches, Manchester United beat Newcastle United, 2-1, on Wednesday to set up a tie against Chelsea who trounced the Wolverhampton Wanderers, 6-0, in their third-round clash.

It has been 40 years since Newcastle last won at Old Trafford and their chances of causing an upset were reduced when midfielder Anderson broke the deadlock with a spectacular left-foot strike from 25 meters (27 yards) just before halftime.

The Brazilian has struggled to force his way into the first team reckoning this season but was a driving force as United took the game by the scruff of the neck.

The hosts made their superiority tell in the second half when midfielder Tom Cleverley, who missed a gilt-edged chance before the interval, doubled the lead with a precise right-foot strike from the edge of the area.

Newcastle hit back when substitute Pappiss Cisse headed home from close-range for his first goal of the season and he went close to leveling when he volleyed an overhead kick against the crossbar.

“Newcastle had a stronger team than us physically. We played fantastic football and I think we deserved it,” United manager Alex Ferguson told Sky Sports.

Manchester United striker Wayne Rooney said he was delighted with his return to competitive action after a four-week layoff following his team’s 2-1 victory over Newcastle.

Rooney had not played since he suffered a nasty gash on his leg in the club’s first home Premier League match of the season against Fulham on Aug. 20.

Holders Liverpool also rang the changes and came from behind at West Bromwich Albion to win, 2-1, thanks to two goals from Nuri Sahin.