Nexon, NCsoft said to have Valve in their sights

Nexon, NCsoft said to have Valve in their sights 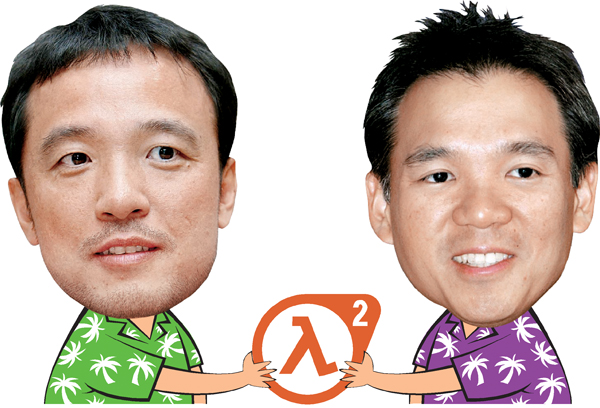 
The two founders of Korea’s leading game companies may be moving to acquire Valve, one of their top five rivals in the United States.

If so this would mark the first joint action that Nexon has taken with No. 2 player NCsoft since Nexon became its majority stakeholder earlier this year.

Another industry source, who asked to not be named, said they also discussed ways of taking control of Valve, known for both its first-person shooter game Half-Life and as the brains behind Steam, an online platform that distributes games with an estimated 40 million subscribers. It accounts for 70 percent of all computer game downloads worldwide.

“The world’s largest game companies have been paying keen attention to Valve because if this acquisition is successful, the companies can not only develop games but also distribute them independently,” said Park Yong-hu, a communication strategy adviser for KakaoTalk, Korea’s most popular online messaging service.

Kim of Nexon showed his interest in Valve during a presentation he gave in Daegu earlier this month.

“Of all the numerous companies I’ve visited, Valve in Seattle left the strongest impression,” he said at the time. “Although Nexon is generating a profit, I’m jealous of the intellectual property rights and business strategies that global game companies have.”

Valve is believed to be worth $2.5 billion. America’s Electronic Arts, which is best known for its FIFA soccer games, reportedly offered $1 billion to acquire it earlier.

The two Korean companies have already begun setting aside money for future projects. In June, NCsoft sold its 14.7 percent share to Nexon for 804.5 billion won ($ 720 million). Industry experts speculated that NCsoft was gearing up for future M&As as Kim of Nexon said at the time that the two companies were aiming to advance into the global market together.

Both companies denied the two Kims had discussed acquiring Valve at their summit, insisting that the acquisition rumors are just that. Moreover, it is not even clear whether the company is up for sale as Valve does not appear to be under any pressure financially at present.

Valve CEO Gabe Newell, in an interview with The New York Times earlier this month, said the company had a better chance of “disintegrating” than in being absorbed by a rival.