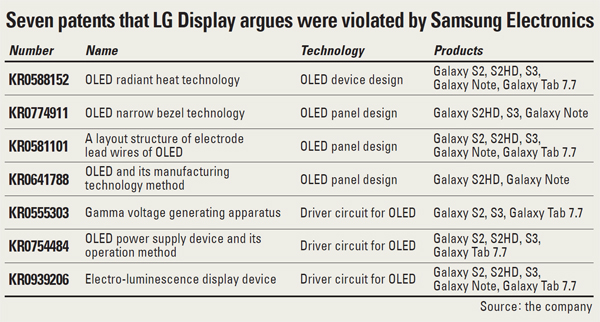 LG Display, the world’s No. 2 maker of liquid crystal displays, said yesterday that it has lodged a complaint with the Seoul Central District Court against archrival Samsung Electronics for allegedly infringing upon seven local patents on organic light-emitting diode (OLED) technologies. 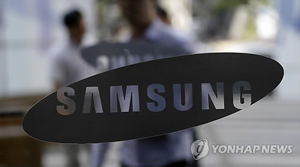 “The company filed a lawsuit to protect its indigenous technologies it developed by pouring in an enormous amount of money and time,” Lee Bang-su, a senior executive at LG Display, said at a press conference yesterday. “The 7 billion won the company seeks for damages is just a symbolic amount, and we could file additional damage suits depending on the result of a court ruling.”

Another executive at LG Display called on Samsung to immediately stop manufacturing and selling products illegally using its technologies.

“We will also strategically consider whether we will file an injunction with a local court to request a ban on the sale of [Samsung products],” the employee said.

Samsung Electronics, which is already waging a global patent war with iPhone maker Apple, said it will fight back.

In response to Samsung’s statement yesterday afternoon, LG Display argued that Samsung’s statistics about OLED patents are from an unattributed source.

It urged Samsung to stop distorting the essence of the lawsuit and stop reacting emotionally to the issue.

“LG Display will calmly handle the lawsuit based on its valuable technology and the truth,” read a statement released by the company.

Macquarie Securities said in a report this week that LG Display is enjoying stronger orders from the iPhone manufacturer after Apple sharply reduced new panel supplies from Samsung Electronics.

A California jury ruled on Aug. 24 that Samsung infringed on six of seven Apple patents, awarding Apple $1.05 billion in damages.