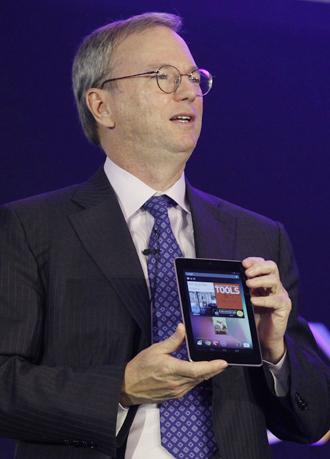 “Nexus 7 has perfectly combined hardware, software and cloud,” said the top Google executive at a press conference held in southern Seoul as he demonstrated the 7-inch tablet. “I can’t wait to see what Korea will do with this new device.”

The tablet has integrated a flurry of entertainment content ranging from movies to games and books through its Google Play marketplace. In May, Google launched an e-book service in Korea.

The mini tablet, the first of its kind from Google under a manufacturing partnership with Taiwan’s Asus, is powered by Google’s latest Android Jelly Bean 4.1 operating system. It carries a price tag of 299,000 won ($268), making it $12 cheaper in Korea than if buyers reserve one from Amazon.com.

Many higher-performing tablet PCs that are already on the market cost more than double this, with Apple’s New iPad retailing for around 700,000 won with 32 gigabytes of storage and a Wi-Fi connection.

Two major retailers, Lotte Mart and Hi-Mart, are starting preorders for the Nexus 7 online from today, with offline sales due to start in mid-October. The product has already been launched in other markets such as Australia, Canada, Britain and the United States. 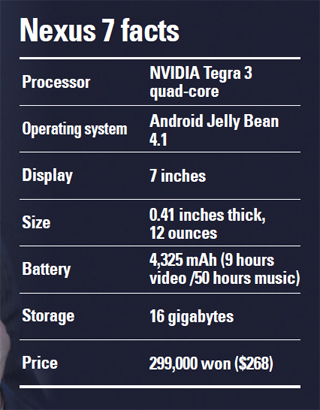 When asked about the ongoing patent court battles between Samsung Electronics and Apple, Schmidt said “one of the worst things has happened because there are so many patents in the mobile world that are overlapping and complicated.”

Patents limit consumer choice and curb innovation, he added, indirectly criticizing Apple, which he described as “both competitor and partner.”

“The last thing we want to see is seeing the products being stopped,” he said.

Google’s Android platform is the mainstay for many of Apple’s rivals, including Samsung Electronics, in the lucrative smartphone industry that has been growing rapidly in the past three years.

In a move to tap that field, Google paid over $12 billion to buy Motorola Mobility. But the acquisition has raised questions about how Google will balance its own mobile device hardware while supplying a platform for companies that are now its rivals.

Schmidt also visited Samsung Electronics’ Seocho headquarters in southern Seoul after the press event to meet with Choi Gee-sung, the vice chairman and top-ranking official when it comes to patent disputes involving Apple, and J.K. Shin, president of Samsung’s IT and mobile communications divisions. A much-anticipated meeting with Samsung Chairman Lee Kun-hee failed to materialize, however. Neither Samsung nor Google mentioned whether Schmidt and the Samsung executives discussed if or how they would collaborate to tackle Samsung’s ongoing court battle with Apple. Schmidt is scheduled to give a speech at Yonsei University in western Seoul today.