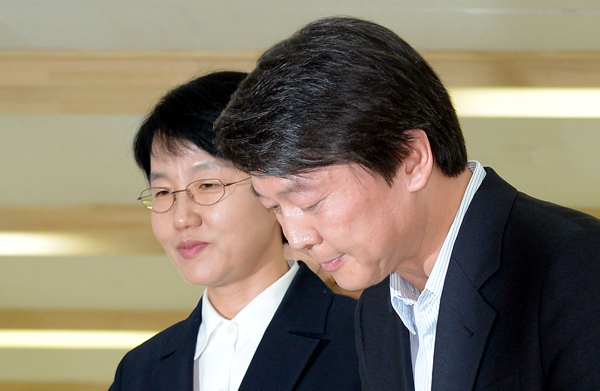 Candidate Ahn Cheol-soo, right, bows to apologize for his wife’s understating of the value of an apartment yesterday at his campaign office in Jongno District, central Seoul, accompanied by campaign manager Park Sun-sook.[NEWSIS]


Independent presidential candidate Ahn Cheol-soo yesterday admitted that his wife under-reported the price of an apartment she purchased in southeastern Seoul in 2001 in an apparent move to pay less tax.

“I found out [about the under-reporting of the apartment’s purchase price] after media reports and confirmed it,” Ahn said at a press conference yesterday at his election campaign headquarters in Gongpyeong-dong, central Seoul. The conference was held to announce that Prof. Jang Ha-sung, dean of the Korea University Business School, was joining Ahn’s camp.

“There may be various reasons [why that happened], but [it] was wrong, and I apologize to the people,” the software mogul-turned-politician told reporters. “I will do my best to live with stricter standards and norms from now on.” 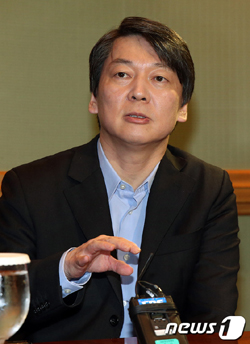 Ahn, however, did not elaborate on the specifics surrounding the allegation or take any further questions from reporters.

On Wednesday, reports alleged that Ahn’s wife, Prof. Kim Mi-kyung of Seoul National University, under-reported the price of an apartment she bought under her name.

Critics say Ahn will be hurt by the revelation. But in fact, it wasn’t illegal to under-report the purchase price of an apartment until the law was amended in 2006. It was a very common practice, in fact, for Koreans of all income levels.

“We’re baffled that such an unexpected issue came out about a strong presidential candidate,” said Jin Seong-jun, spokesman of Moon Jae-in, the Democratic United Party’s presidential candidate. “The DUP has been emphasizing a high-level ethical standard when holding confirmation hearings of government officials, which is valid until this day.”

The ruling Saenuri Party attacked Ahn. “[Ahn’s wife] reported a false price of an apartment when buying it in 2001, raising speculations over tax evasion,” said Chung Woo-taik, a ruling party lawmaker, yesterday. “But [Ahn] wrote in his book that severe punishment should be given to those evading taxes.”